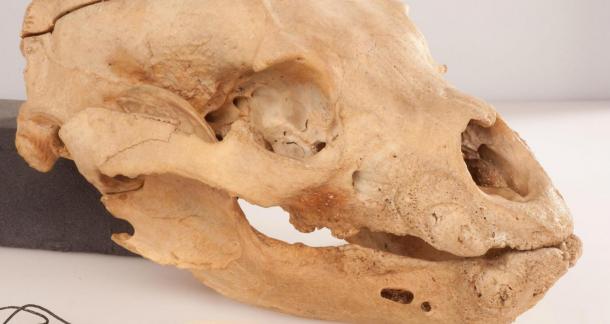 There are so many facts in this story that it's best to just lay it out there.

Winnie-the-Pooh was based on a real bear, Christopher Robin was a real boy, and now, Winnie-the-Pooh's skull is on display at London's Hunterian Museum.

Winnie, full name "Winnipeg", was brought from Canada to England in 1914 as a cub. Winnie's owner enlisted in WWI and turned Winnie over to the London Zoo for safekeeping. And apparently, visiting children could feed the bear honey and snacks when they visited, which explains why her skull is missing some teeth.

Christopher Robin, A.A. Milne's son, visited Winnie in the zoo, and there are pictures of the young boy and many others inside the enclosure with Winnie.

Winnie died in 1934, and The Royal College of Surgeons preserved her skull because, as Dr. Sam Alberti explains:

We took a lot of animals who died in London Zoo to understand their anatomy, the science behind these animals...we have this research collection to understand how animals behave and the diseases they're subject to.

In fact, the Royal College of Surgeons' Hunterian Museum boasts 11,000 animal skulls. Whether the museum hosts the skulls of Yertle the Turtle, Paddington Bear, or any of The Wiggles is unknown.

Winnie had been just one of many skulls in a back room somewhere until a recent inventory brought her back to the surface again.

I think Winnie-the-Pooh would have been very curious to learn that the bear that had inspired him ended up here.

The Tao of Pooh

Dr. Mutter's Marvels: A True Tale of Intrigue and Innovation at the Dawn of Modern Medicine

So many questions. My top 3.

1) Am I the only one surprised to discover stuffed toys have a skeleton?

2) What about Christopher Robin's skull? In the interests of fairness, shouldn't that also be on display?