UPDATED WITH WINNERS: Win A Copy Of Paul Tremblay's 'Swallowing A Donkey's Eye' 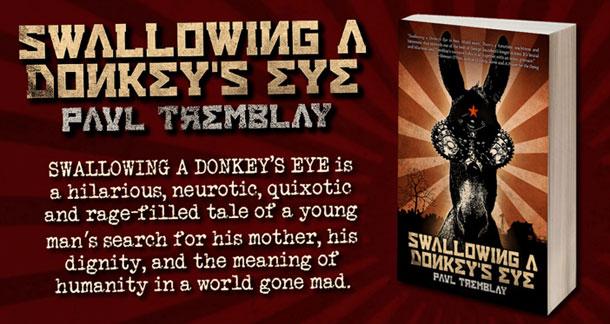 The polls are closed and the tallies are in. Author Paul Tremblay was kind enough to pick the winners. They are as follows:

They were all great answers.

Renfield because he's obviously smarter than I am.

Leah D for mentioning Pavlov's Dog (which is used multiple times as a metaphor in the novel).

No free copy, but much love and praise to JY's:  "It's like admitting that you're still a U2 fan."

Thanks for playing along at home. This was a lot of fun. Renfield, Leah-- PM me your addresses. Hope you guys enjoy the book as much as I did.

Genre-hopping author and LitReactor instructor Paul Tremblay has a new novel out today. It's a comedic Orwellian dystopian called Swallowing A Donkey's Eye and you want it. I just started reading my copy last night and let's just say I went to sleep a lot later than I had planned. To the synopsis!:

Farm is the mega-conglomerate food supplier for City, populated with rabidly bureaucratic superiors, and sexually deviant tour guides dressed in chicken and duck suits. City is sprawling, technocratic, and rests hundreds of feet above the coastline on the creaking shoulders of a giant wooden pier. When the narrator’s single mother, whom he left behind in City, falls out of contact, he fears the worst: his mother is homeless and subsequently to be deported under City to the Pier. On his desperate search to find his mother, he encounters ecoterrorists wearing plush animal suits, City’s all-powerful Mayor who is infatuated with magic refrigerators and outlaw campaigns, and an over-sexed priest who may or may not have ESP, but who is most certainly his deadbeat dad.

We've got two copies up for grabs. All you have to do is tell us what the book's title is a reference to and give a quick interpretation of the meaning of said source. Post your answer in the comments. I'll pick my two favorites. Hell, maybe I'll even try to get Paul to pick the winners. Winners will be announced on Monday the 20th. Have at you!

It makes me think of the (song?) Pree Sisters Swallowing a Donkey's Eye by the Neutral Milk Hotel.

The music has a post apocalyptic feel, so I imagine it could be Paul's inspiration.

The Mucuna Pruriens is a plant that is sometimes called Donkey's Eye. It has been used to treat sexual dysfunction, Parkinson's disease and depression, yet if it isn't prepared properly, it is toxic. In fact, just touching it can cause severe itching because of seratonin in the leaves. Scratching it quickly spreads it to other parts of the body.

In essence, you have something that can may either heal you, or kill you in the process. It is a theme of being both potentially good and pontentially dangerous. With all its possibilites of healing, it carries with it an ugly chance of suffering.

All right, I'll give it a go. It's true that Swallowing a Donkey's Eye could be a reference to the Neutral Milk song, but beyond that a "donkey's eye" is also the seed to a tropical leguminous plant. The seed, when ingested, posesses relatively high levels of dopamine, a chemical that plays a large role in reward-generated learning. As many of us already know, drugs like meth and cocaine target the dopamine system in the brain, resulting in addiction. Weee.

I'm basically talking out my ass here, since I haven't read the book, but my best guess is that the author is making a statement about how society drives the actions of individuals through a system of reward and punishment, ala Pavlov's dog.

It's like asking out a girl who's out of your league.

It's like admitting that you're still a U2 fan.

@J.Y. - You should win every contest.

It's actually a reference to an old French/Romany cant (a minced language used to disguise the speech from outsiders, e.g. the British Thieves Cant.) The "donkey" part is easily decipherable, donkey meaning "ass;" a man's backside. It can be interpreted as referring to an arse-kiss who kisses arse so hard that he can be said to be "swallowing a donkey's eye," the eye representing the most foul part of the "donkey." Everyone knows what an ass-kisser is, and how that could be related to the ladder-climbing bureaucrats that would populate the particular brand of conglomodystopia as described in Tremblay's book.

Now what's particularly interesting is that if you follow the ass-kisser idiom back further, its meaning was a term to satirize the type of  people that were so superstitious and self-serving that they would just as soon kiss the anus of a black cat to counteract the bad luck they would receive if they should come upon one's path. Obviously this satire exists in Tremblay's work, but it's funny to think how throughout centuries the blue-collar folk have been making fun of these fools trying to smuggle themselves into the ruling class.

If Renfield made that up, he has my Platonic vote.  (I'm totally not kissing his ass.)

I always figured ass-kisser came from the supposed practices of Black Masses.  (Always after reading about such things, that is.)  I guess they could be related.

spacemonkey8 from California is reading Tales from Development Hell August 16, 2012 - 7:12am

Neutral Milk Hotel song. It means doing something you'd rather not have to; sucking it up and following through even though it is distasteful to you.

Joshua Chaplinsky from New York is reading a lot more during the quarantine August 16, 2012 - 9:31am

Since it's been brought up multiple times, anyone have any further thoughts on the Neutral Milk Hotel? The song in question is an ambient instrumental. Any interpretations in regards to that?

If you listen really close, "I love you" or maybe "I'm ready" is consistantly repeated through the synthesizer. According to one of the youtube comments I saw, the song is supposedly what you hear when you die.

That "i love you" thing is just conjecture, that sound's actually looped guitar feedback, not a synthesizer vocoder, and the rest of the instruments are Gamelan percussion. The song was a filler track to pad out the album so it would fit on a 33 1/3 LP without having a bunch of dead sound on there, a pretty common practice when people still had to worry about vinyl RPM before the CD finally killed that idea. So it was a good place to throw in a noisy freeform jam that would annoy uptight people expecting a pop album. It's their sort of take on the old Looney Tune theme "The Merry-Go-Round Broke Down," which, if you remember Daffy Duck singing the tune, had a verse like this:

Which, that "horse with a lavender eye" was a clever play on the old gypsy phrase (as in a guy who thinks his ass-end smells like lavender) by Looney Tunes writer Tex Avery (notice that the NMH album is "On Avery Island") NMH took it and weaved it into the narrative of the album, with the Pree Sisters, who rode on the Merry-Go-Round, and at the point that the carousel brokedown pitched forward and swallowed the horse's lavender eye. I think we can all see the symbolism in that and why'd they'd have a message like that for a fun, bullshit song they had to put on the record anyway.

Joshua Chaplinsky from New York is reading a lot more during the quarantine August 16, 2012 - 9:00pm

I can't tell if Renfield's being serious or not.

I have nothing to say that hasn't already been said. But I totally had every one of those thoughts and would have posted them. Can I still win?

It's a cool song. I love ambient music, which is why I pimp all the free stuff at http://www.liminalrecs.com a lot. Or at least I will, since I just found the site like a week ago. Free music!

For me, "a donkey's eye" evokes prescience and a keen sense of sight, as in the biblical story of Balaam and his ass:

Angry that the prophet Balaam starts a journey that doesn't please Him, God sends an angel to stop him. Since the angel is invisible to Balaam, but not to the donkey he's riding, Balaam gets fed up with the scared animal and starts to punish her. It's then that the aforementioned angel decides that it'd be a good idea to give the gift of speech to the donkey, and this one proceeds to explain to Balaam that he's just basically incurred in God's wrath.

With this in mind, my vote goes for a "donkey's eye" being some king of drug/artifact that, once ingested or otherwise put inside the human body, allows people to see what might be not all that apparent at first sight.