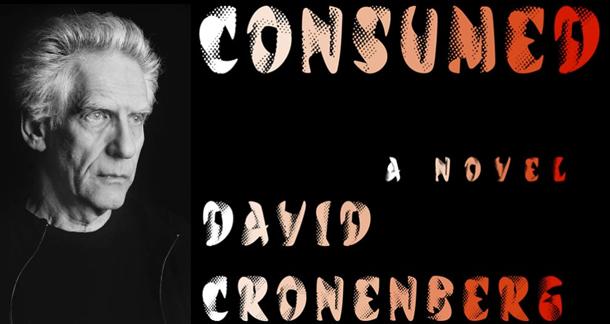 Canadian auteur David Cronenberg has directed film adaptations of some of your favorite novels—Crash, Naked Lunch, The Dead Zone—but did you know he always wanted be a novelist himself? It's what he went to university for. (That's what they call college in Canada: university. It's the little differences.)

Well, almost fifty years later (!), he's finally fulfilled his dream, and consequently, ours. The dream of reading a David Cronenberg novel. It's called Consumed, and as LitReactor's own Joshua Chaplinsky (that's me) can attest, it's quintessential Cronenberg. He doesn't want to say more, because he is probably going to review it for the site. But the book's own jacket describes it thusly:

...the story of two journalists whose entanglement in a French philosopher’s death becomes a surreal journey into global conspiracy. ...parallel narratives become entwined in a gripping, dreamlike plot that involves geopolitics, 3-D printing, North Korea, the Cannes Film Festival, cancer, and, in an incredible number of varieties, sex.

And if that doesn't sell you, Aragorn, King of Gondor, says:

This fiercely original book, with the scope and poetic exactitude of Nabokov's best work, has the power to unsettle, disarm, and finally make the reader absolutely complicit.

The book comes out September 30th, but if you're feeling lucky, you can win a copy via Simon & Schuster. All they are asking for is your immortal soul, in the form of your email address. Good luck.

You could ask for my immortal soul, but a publisher? *shudders*