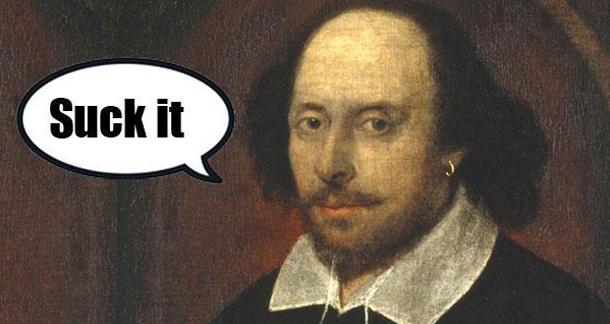 Anyone out there thinking William Shakespeare’s sole source of income was his celebrated career in theater might be shocked to learn the Bard was also a miser not unlike Ebenezer Scrooge, and a bit of a scofflaw to boot. Researchers at Aberystwyth University in Wales have discovered that Shakespeare “was a ruthless businessman who grew wealthy dealing in grain during a time of famine,” Jill Lawless of The Huffington Post reports.

The research team—comprised of Jayne Archer, Howard Thomas and Richard Marggraf Turley—dug through historical archives to find this tidbit of information. It isn’t clear if they were specifically looking for details on the author’s shady business practices, though according to Lawless "the charge sheet against Shakespeare was not entirely unknown” prior to the team’s findings.

So what did ole Willie Shakes do to piss off off the law? Lawless has the answer:

‘Over a 15-year period he purchased and stored grain, malt and barley for resale at inflated prices to his neighbors and local tradesmen,' they wrote, adding that Shakespeare ‘pursued those who could not (or would not) pay him in full for these staples and used the profits to further his own money-lending activities.

He was pursued by the authorities for tax evasion, and in 1598 was prosecuted for hoarding grain during a time of shortage.

Archer, a literature professor at Aberystwyth, believes we should examine Shakespeare’s behavior with historical context in mind, rather than judge him outright. He did, in all fairness, live during the “Little Ice Age,” a period of unusually harsh winters and exorbitant rain that yielded poor harvests and widespread famine. Hoarding was simply a means of ensuring his family and neighbors wouldn’t starve should a harvest go south. She says:

So what do you think: is Shakespeare now a badman whose work we can no longer enjoy, or is this bit of history merely a footnote to the life and body of work we know and love?

Yes, let's judge all our our past great men and women through the fetid lens of today's politically correct world.  That way we can tear down all the old symbols of our greatness and make room for the officially sanctioned next generation to come it and take their place.  You know the drill, Christopher Columbus was a murderer because he didn't understand microbiology, Washington and Jefferson were evil men because they kept slaves, etc...  Perhaps we'll find some way to hate on Mozart or Beethoven so that we can replace them with more contemporary types ... Yes, I can see it all now... busts of P-Diddy on top of your steinway...

Maybe in a few hundred years another generation of twits and tear down whatever we erect.

Dwayne from Cincinnati, Ohio (suburbs) is reading books that rotate to often to keep this updated April 1, 2013 - 10:20pm

Well tax evasion isn't cool, but it sounds like he just bought low and sold high. Unless there is more to it, what is so bad about that? Would they have been better off without him selling grain or something?

I always kind of liked Thoreau for his anti-tax stance and reclusive ways, even though I do pay mine and live in a large city. Shakespeare is no different. It was clear in his writing that he saw the flaw in the class system. However, I do find it interesting that he demonizes Shylock and turns out to be a bit of a Shylock himself. As for selling products at exorbitant rates: he is no different than our business here in America. You know all that supply and demand, inflation bullshit.