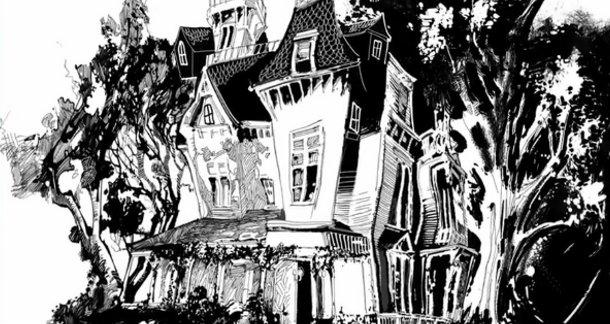 Sheesh, at this rate, we're going to have to hire another news person just to handle all of Neil Gaiman's projects this year.

In addition to his new novel, the return of The Sandman, and the American Gods television show coming to HBO, Gaiman decided his Wikipedia page needed more headings, and recently revealed that he's written the plot for a video game, titled Wayward Manor.

"Back in the late 1990s I spent a lot of time working with various gaming companies," he said. "What tended to happen is I put an incredible amount of work in these things and just as something was about to happen, the company was about to go bankrupt."

Wayward Manor takes place in a haunted house, and you get to play the ghost. Unhappy with the family living in your haunt, you have to come up with creative ways to scare them out. While it does seem to be a puzzle game, Gaiman hints that there is more to this story than meets the eye.

I could continue talking about it, but I really can't compete with an English accent, so I'll let the man himself pitch it to you.

Wayward Manor has a website, so feel free to poke around. If you think it's up your alley, you can purchase some of the merch they have for sale, which goes to support the game, Kickstarter-style. If you have $10,000 worth of love, you can enter for a chance to dine with Gaiman early next year, sharing what he insists will be "the spookiest dinner in Los Angeles."

So now, Neil Gaiman can add video games to the extensive list of mediums in which he's written, which includes adult novels, children's books, comics, television shows, movies, plays, and song lyrics. I'm predicting an annoucement of a story told through interpretive dance and smoke signals next, but that's only speculation at this point.