What If Star Wars Was Written by William Shakespeare? 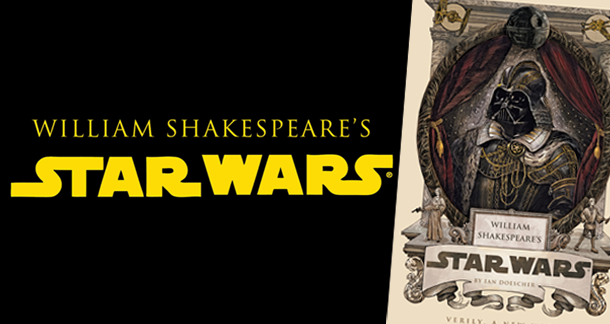 Good versus evil is an old story, although it seems like every generation thinks they invented it, kind of like sex. It’s also a story we see played out on the small screen as well as the silver screen. Now it’s caused one author to ask: “What if Star Wars was written 400 years ago by William Shakespeare?”

Now’s your chance to find out, with the release of a trailer for the new book by Ian Doescher called, wait for it, William Shakespeare’s Star Wars.

Return once more to a galaxy far, far away with this sublime retelling of George Lucas’s epic Star Wars in the style of the immortal Bard of Avon. The saga of a wise (Jedi) knight and an evil (Sith) lord, of a beautiful princess held captive and a young hero coming of age, Star Wars abounds with all the valor and villainy of Shakespeare’s greatest plays. ’Tis a tale told by fretful droids, full of faithful Wookiees and fearsome stormtroopers, signifying... pretty much everything.

Earlier this year, Doescher released an interactive version on Tapestry, although it only seems to be an ad for the book now. A Yale Divinity School grad, Doescher has taken the plot and dialogue from the 1977 movie, Star Wars Episode IV: A New Hope and rewritten it in iambic pentameter — and it works! You can see for yourself here:

Released by Quirk Books, the book is available from today. What do you think? Let us know.

It sounds really shity. It is the same lines with older phrases. Maybe they should pin it on a contemporary of Shakespeare. Shakespeare wrote beautiful sentences that followed a beat.

They better not fuck with the Jawas.