Watch Stephen King Read From His Sequel to "The Shining" 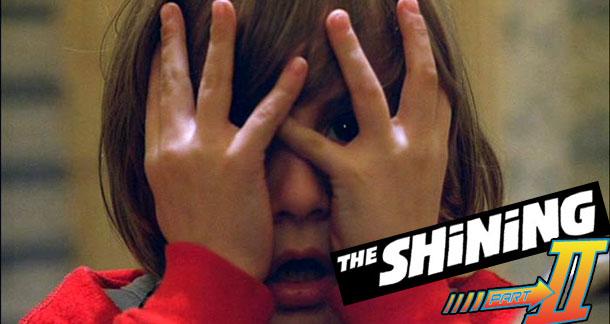 According to just about everyone, Stephen King has finally unveiled the long threatened promised sequel to his 1977 masterwork, The Shining. It's called Dr. Sleep, and takes place some 30 years after the chilling events of the first novel. Cute little Danny Torrance is now all grown up and taking care of the terminally ill. And by "taking care of," I mean helping them to die like some sort of psychic Jack Kevorkian. This in and of itself sounds interesting enough, but, oh yeah- the book also features a roving pack of vampires called "The Tribe."

Is this really a good idea? Apparently 5,861 of you think so, because it beat out requests for a new Dark Tower book in a poll on King's website. I guess no one is concerned about what happens when Hollywood sees dollar signs and talk turns to the inevitable movie sequel. I'm expecting less of a Kubrickian masterpiece and something more along the lines of a Steven Weber starring mini-series.

Check out this video of King at George Mason University, reading an excerpt from the ill-advised work in progress:

Joshua Chaplinsky from New York is reading a lot more during the quarantine October 1, 2011 - 3:52pm

Look at poor little Danny. He is so horrified by the thought of this sequel.

I criticize King all of the time, yet I can't stop from reading all of his work and loving every word. I'm excited for this, even though every part of me is asking why.

There are many people out there that would buy Stephen King's fecal matter pressed into a hard cover. Sadly, I'm one of them. Under the Dome was one such book. I seriously (fantasized) considered driving to Maine just so I could smoke him with my car. Magic ticket my ass McBane.

I suggest just driving to Maine to smoke with him in your car, Piirus.  One less car wash and felony on your record (I'd suppose).

I just don't know what to think of this...

Not my first choice for a sequel, but I am sure it will sell like crack and Krispy Kreme donuts combined.

Jeremy hit the nail on the head. I thought King was retired, but that shows you how on-top of the literary world I am these days.

The man now has THREE books scheduled for release in the not so distant future.

Fucking insane. He must vomit, sweat, and shit out words all at the same time.

And for the record I think he has written many more good books than he has bad ones.

A quick glance over my shelves reveal that I own forty three King books. There are still a bunch I dont have. Damn.

silliness. and I can intellectualize this to the bone, have it make perfect sense, be even slightly intriguing, and still: silliness.

ok, i'm an idoit. I read this as a sequel to the Stand.

Not sure why anyone hates this idea. And as far as a Kubrick-ian masterpiece??? In SK's version the alcohol was only part of Jack's problem the rest was he was an a-hole. In King's mini series it is clear that he isn't a bad guy but the hotel is dredging up every bit of evil that is lurking in an otherwise good man. What I'm disappointed in is the proposed remake of the stand. IDK, maybe it will stand up too.

All I hope is, if they adapt it into a film, they find a director consistent with the stylistic impact of Kubrick.  Who do you think could follow him up?  I'd probably say Fincher after seeing the trailer to the Girl with the Dragon Tattoo...

Hetch Litman from Somewhere in the mountains of the Pacific Northwest is reading The Violent Bear it Away by Flannery O'Connor December 19, 2011 - 11:41am

I think it's going to be awful--but I'll read it. I've read all the rest, and so I just have to see for myself (like Duma Key and UTD).

Didn't he say he was retiring?

He's like a hardboiled cop. They say they're retiring, but they just keep coming back in.

Somewhere Tim Daly is hitting the gym and getting ready for his agents call.

People always criticize Stephen King because he keeps churning out books, and I always wonder why. Personally, I find his persistance inspiring. He's in love with and more dedicated to his craft than any other writer I know, and I would think that lots of aspiring writers would applaud him for continuing to do what he does best as he starts to approach the later years of his life. King has set the bar very high for his genre, and its unreasonable to expect to him write anything better than his classics like The Shining, It, Carrie and others; that's like expecting J.K. Rowling to write something better than the Harry Potter series. I'm thrilled that King is writing a sequel to The Shining, and of course I think that its unusual that he would add vampires into the mix, but I trust the he has a good idea and that he will use his masterful storytelling to make it work.