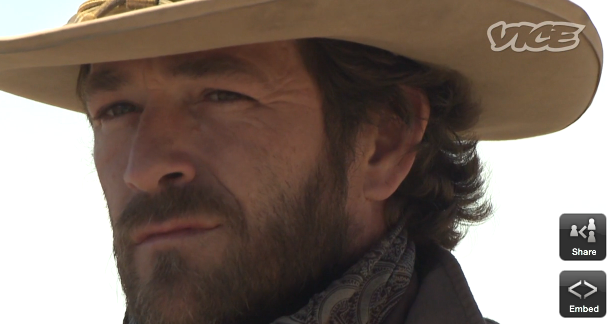 And no, Perry isn't playing the Judge, so you can all calm down. That unenviable task falls to... Jacob from Lost? (For the record, I haven't watched this thing yet, and he could quite possibly be a fantastic choice.) The film also features cool character actor Scott Glenn and Franco the Lesser, Dave.

Franco shot the footage about three or four years ago, and describes it as "the sequence where Tobin recounts how the Glanton gang met the Judge." I know Franco is the object of much literary scorn, but as far as I'm concerned he did a pretty damn okay job with McCarthy's Child of God (in limited release as of August 1st), so you never know. Let's all give it a gander and reconvein in the comments, mkay?

What did you think? Should someone drive a truck full of money up to Franco's house and turn him loose? Does Pellegrino work as the Judge? You be the judge.

Franco is not a bad director, and Child of God was good, but I don't think he's got the directing chops to handle Blood Meridian. I'd much prefer John Hillcoat - his version of The Road was incredible and if he and Nick Cave wrote it, like they did with The Proposition, it will be something really incredible.

Hillcoat would be perfect.

I like James Franco but this is far too big for him.

Scot Glen did a great job. However, the judge character's image wasn't even close to what I imagined the judge to look like.