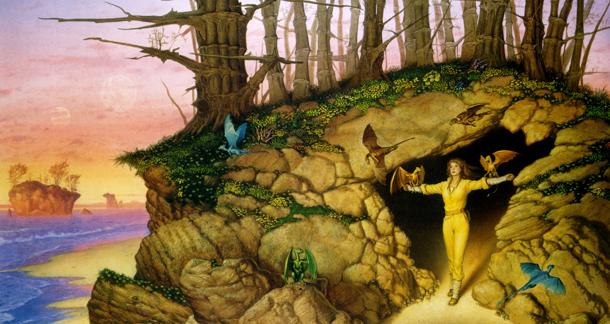 This may not have seemed possible a few years ago, but in this post Game of Thrones world, large-scale fantasy has studios seeing dollar signs.

Deadline reports that Warner Bros. has optioned the rights to Anne McCaffrey's Dragon Riders of Pern series, which spans a whopping twenty-two books. That's right. Twenty-two. Who's the Mother of Dragons now, Khaleesi?

The deal was brokered by WB Exec Drew Crevello, who previously worked on the X-Men franchise as a VP at Fox.

Here's a summary, courtesy of /Film:

The first books tell of a world that has fallen into an unusual conflict, in which an essentially feudal society supports a dwindling but still powerful class of warriors. The warriors’ power comes from the fact that they ride giant fire-breathing dragons, with which each rider has direct telepathic communication. Stories say the dragons once protected the planet from a periodic rain of all-consuming spores, but those rains haven’t taken place for decades. The dragons say most people, are no longer needed, their appetites unwelcome.

And then the spores return.

Sounds like Reign of Fire meets Avatar. Here's hoping it's better than both.

Who's read McCaffrey's novels? Share your anger/excitement in the comments.

OtterMan from New Jersey, near Philadelphia USA is reading Ringworlds Children July 31, 2014 - 10:08am

I remember reading a few of these, probably the first ans possibly one or two of the follow ups. Did not know there were 22!! As I recall they were pleasant fiction, nothing earth shaking but very readable. I'm sure Hollywood can do it's usual bang up job of butchery on it...

Hollywood (unless it is television) usually makes the excuse of merging character "for time." Oh no Mr. Disney, we all know your real reason.

On another note, I hope they do a good job with this.

Me! Great books...they take place on a planet populated by Earth explorers who adopt the flying creatures and fantasy lore when they cannot go home due to the spores. The series starts hundreds of years later when the humans have forgotten all about Earth and have lived without modern technology. So you watch them evolve as they discover the remains of the original spaceship and fight the spores...it's fantasy meets sci-fi. Geek heaven!