Wal-Mart Kicks Kindle To The Curb, Will No Longer Stock The Popular eReader 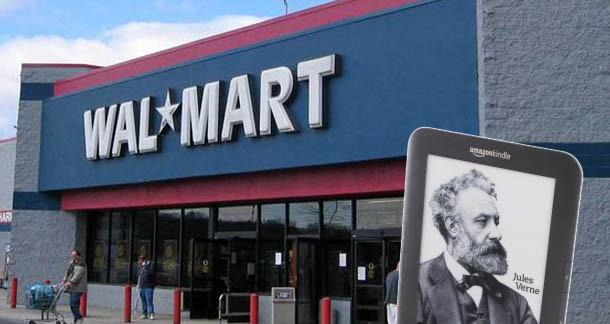 Following a path blazed by Target, Wal-Mart has just announced that its store will no longer carry Kindles. Current stock will be sold off like normal, but all those pretty new Kindle devices announced earlier this month won't make it to the shelves.

In a memo sent to store managers, and excerpted by Galleycat, the company didn't give a reason for dropping the massively-popular device. But the writing on the wall is pretty clear--Amazon sells a lot more than eBooks, and they're a strong competitor to big box retailers. Selling the Kindle is tantamount to supporting the enemy.

If you absolutely need to buy a Kindle from a physical retailer, you can still go to Staples or Best Buy. Though... for how long?

What do you think? Is it petty, or a smart business decision? Do you need to hold a Kindle in your hands and play around with it before committing to buy?

What about the Nook and other eReaders?  Still selling those?

I honestly can't blame them.  It's not like they get a cut of Amazon sales on digital purchases, it's just empowering people to circumvent thier storefront even more when they sell those things.

I want to see Wal-Mart fail. That said, I think this is spiteful and a poor business move, in the end. The kind of person who buys a Kindle at Wal-Mart is likely the kind of person who will need to touch it before buying. Cutting Kindle sales (as well as Kindle/Amazon gift cards I presume) will hurt Wal-Mart and Target's sales (albeit slightly) and help Amazon's sales (considerably more than it hurts Wal-Mart).

I faced a similar issue at my old job. We elected to carry Tempur-Pedic, Interactive Health, and Sleep Number, all our retail competitors, because we may as well be getting a share of the profits (plus our sales went up in all categories based on the foot traffic). Consequently Sleep Number pulled out of all competitive retailers because their overall profits ended up taking a hit.

My Kindle was a gift, but I know that it was purchased at Best Buy so I guess it doesn't matter. However, I used to buy Kindle gift cards at Target. They stopped selling them, so I rarely go there anymore. As sad as it is, I buy most stuff through Amazon. Since Borders closed, which was one of the few bookstores in my city, I buy all of my books from Amazon and most of my DVDs too. Walmart and Target will be fine without my business. Though I do spend about $1000 a year on books/media from Amazon, which I used to split between Borders, Target, and Walmart (depending on who had the best price on what I was buying).