Visual Language of Comics Has its Roots in the Ice Age 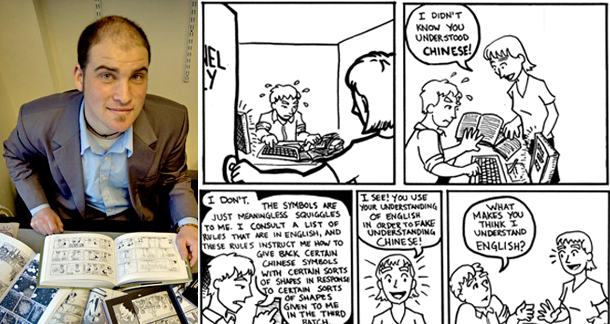 Comics aren’t just for kids anymore, right? Since the advent of the graphic novel and the trends in Manga and Anime, we’ve become a lot more accepting of graphic novels as a means of telling a story. Neil Cohn was an early obsessive after his dad showed him his old Superman and Batman collection when Neil was four: like a lot of kids, he started drawing his own comics. He’s since become a psychologist and embarked on a study of the language of comics, looking at the connections between the visual images and the way we use language and stories to communicate.

Cohn’s new book out in January, The Visual Language of Comics, dismantles comics like Peanuts and expounds on his theory. “At a neural level, the pictures of comic strips are processed as another form of language, with their own vocabulary, grammar and syntax.”

The drive to tell stories with pictures certainly has deep roots. Stone age paintings in places such as the Chauvet cave in France seem to show scenes of galloping horses and pouncing lions, using techniques that would be familiar to graphic artists today. More advanced picture narratives appeared in works such as the Bayeux tapestry and Paupers' Bibles. In some indigenous Australian cultures, sand drawings are used as a regular part of discourse; in fact, drawing is so entwined with speech in the language of these cultures that you can't be considered fluent if you don't know the appropriate pictures.

As an undergrad, Cohn enrolled in an Asian studies course and took a linguistics course along the way before waiting five years to get into a graduate program working with linguist Ray Jackendoff, “known for groundbreaking work comparing music to language”, at Tufts University, Massachusetts. And with the help and supervision of psychologists Gina Kuperberg and Philip Holcomb, he began testing his theory.

He began by adapting classic experiments in psycholinguistics from the 70s and 80s which had tried to analyze the way our brains process grammar and tested his ideas on volunteers. By using Peanuts strips, he would reorder the frames or insert blanks and study how the brain worked its way around the issues, keeping track of their reaction times.

Recording his volunteers' reaction times as they answered questions on the strips, he found that the grammatical sentences did seem to be processed more quickly – just as you would expect if the brain were using underlying grammatical rules to try to make sense of the confusion. Further experiments played more subtly with Snoopy's grammar. For instance, in one study Cohn placed blank panels in the middle of a "clause", interrupting the flowing sequence. "I compare it to moving a comma to the wrong place in a sentence," he says. Measuring his subjects' brain activity using electrodes placed on the scalp, he found the same pulse of activity after 600 microseconds — known as a P600 signal — that seems to come as the brain tries to grapple with violations of written or spoken grammar.

Fascinating. In an age where visual imagery is a constant through most media, it doesn’t seem surprising that we’ve adapted to understand even subtle clues in what we’re seeing — comics just may be more blatant than ads on the TV. So next time you read a comic, will you be aware of the subtleties you take for granted? Or will you just enjoy the story?