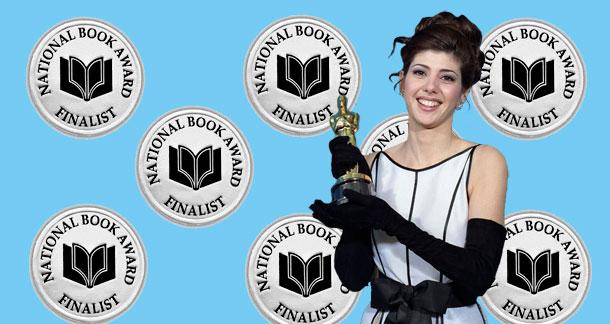 According to tweets from Publishers Weekly, Lauren Myracle  has withdrawn her NBA nomination at the National Book Foundation's request. She was asked to do so in order to "preserve the integrity of the award.” As consolation, the NBF has promised to donate $5000 to the Matthew Shepard Foundation.

Charitable mea culpa aside, is this a dick move on the part of the NBF?

The finalists for the 60th annual National Books Awards have been announced--and while there's usually five nominees to a category, Young People's Literature has six.

That's because the National Book Foundation, which administers the awards, announced the wrong book during a live broadcast.

Shine by Lauren Myracle was named as one of the five nominees, a spot that was actually supposed to go to Chime by Franny Billingsley. Drama isn't confined to the Oscars, it seems.

Though, the National Book Foundation is leaving all six in the running for that category. Which is only fair. Can you imagine that phone call? "Hey, you were almost eligible for one of the most prestigious literary awards in the United States, second only to the Pulitzer. But not anymore! Here's an Amazon gift card."

I have not read any of these books.

Joshua Chaplinsky from New York is reading a lot more during the quarantine October 14, 2011 - 2:37pm

Jack Palance is doing one-armed pushups in his grave.

The Chronolgy of Water is the only Nonfiction book I'd even consider this year.  But I haven't read any of these nominations either.

Joshua Chaplinsky from New York is reading a lot more during the quarantine October 14, 2011 - 10:56pm

It's a funny image, but the whole Marisa Tomei thing is actually an urban legend.

Chester Pane from Portland, Oregon is reading The Brief and Wondrous Life of Oscar Wao by Junot Diaz October 15, 2011 - 8:05am

Happy accident. Some writers have all the luck.

For more information on the Awards, which took place in Portland, Oregon at Literary Arts click this link to the Think Out Loud podcast.

Think Out Loud is an NPR radio talk show that broadcasts from Portland.

Is there anyone else who thought, "Who the fuck are these people?" after reading the list of nominees?