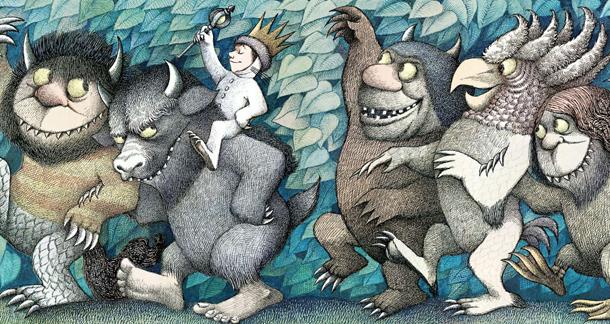 A Kickstarter campaign to produce an unlicensed sequel to the late Maurice Sendak's seminal children's book Where The Wild Things Are has met its demise. Harper Collins requested the project's removal, as Sendak's estate holds the copyright to any Wild Things-related material, such as sequels or other 'derivative' works.

I'm not sure how campaign founders Geoffrey O. Todd and Rich Berner ever thought they'd get away with this. They claimed to be inspired by comments Sendak made in an interview for TateShots:

Sendak then paraphrases a bit of advice supposedly coined by Herman Melville (I wasn't able to substantiate this):

Artists have to take a dive, and either you hit your head on a rock, and you split your head and you die. Or, that blow to the head is so inspiring, that you come back up and do the best work you ever did. BUT, you have to take the dive, and you do not know what the result will be.

So, because the author vehemently detests doing a sequel himself, but recommends that other artists 'take a dive,' i.e., an incredible risk regardless of the consequences, these guys felt they could go ahead and attempt a sequel themselves. But surely Todd and Berner realized there would be rights to obtain, or at least licensing fees and royalties due to the estate. I mean, if it weren't for that damn Warner Bros., I could make a hit Batman movie every six months, amirite?

What classic property would you attempt to make your own?