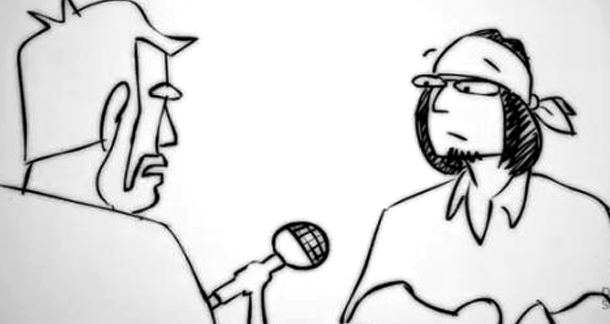 David Foster Wallace, probably best known for his novel Infinite Jest, was a star in the American literary firmament and his untimely suicide in 2008 left many wondering what he would have achieved had he survived.

During his career as a novelist, essayist, and Roy E. Disney Professor of Creative Writing at Pomona College in California, Wallace gave a number of interviews, some of which haven’t been heard or seen yet. An interview he did in 1996 on New York's NPR station WNYC with Leonard Lopate, talking about his youth and ambition has been picked up by PBS Digital Studios in collaboration with Blank on Blank...

...a nonprofit whose mission is to "curate and transform journalists’ unheard interviews with icons, bringing them to life on radio, mobile apps, YouTube, and beyond."

The resulting animation is pretty amazing — and I have to say it’s a pretty cool way to make something extraordinary out of a recording of two voices. I would even agree with HuffPo’s assessment that it’s “beautiful”. But don’t take my word for it, you can see it for yourself here:

For some reason listening and relistening to the interviews of DFW has become a regular thing for me. It's comforting to listen to this guy talk. Loved the animation.

Jeff from Florida is reading Another Side of Bob Dylan by Victor Maymudes April 18, 2013 - 4:37pm

His essay about trying out a cruise ship for himself won me over to his brilliance. I never liked Infinite Jest though. Maybe I just need to pick it up again.