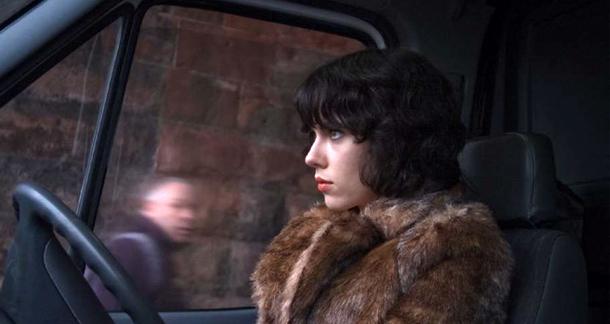 Under The Skin, a new film from Sexy Beast director Jonathan Glazer "loosely based" on Michael Faber's 2000 novel, has met with some mixed emotions on the festival circuit, but that's kind of the point. In this spoiler-heavy article from the L.A. Times, the filmmaker states that he intended to make an unsettling, difficult-to-watch film, with star Scarlett Johansson quite literally immersing herself in the role of a predator.

Here's a teaser trailer (courtesy of SlashFilm) that encapsulates the movie's weirdness. Check it out (or, for a higher res version, head over to The Guardian):

Looks pretty trippy, but "loosely based" is definitely appropriate here. Now, I'm of the opinion that books and movies don't have to be the same. If it's a good film, it's a good film. I'm having some trouble at the moment simply because I love Faber's novel, and as-written (with a few creative changes, of course), it would make a terrific picture. This of course leads to the inevitable question: when movie adaptations stray really far from their source material, can you reasonably call them by the same name anymore?

Fortunately, Under The Skin doesn't look like another Lawnmower Man.

Any other fans of the book out there? Does this teaser trailer intrigue or anger you?

Dino Parenti from Los Angeles is reading Everything He Gets His Hands On September 3, 2013 - 9:43pm

Well, you could do what Copolla did with Apocalypse Now, and state that it was "inspired" by Conrad's Heart of Darkness.

I'm interested in seeing this if for no other reason then in trying to portray a coldly staring person who struggles to express human emotion, Scarlet Johanssen may turn out her finest performance yet.

Joshua Chaplinsky from New York is reading a lot more during the quarantine September 4, 2013 - 6:56am

Not a fan of the Scar Jo.

Dino Parenti from Los Angeles is reading Everything He Gets His Hands On September 4, 2013 - 11:28am

Neither am I, but I think this type of role works towards her "strengths."

Earlier this week I read this article and watched the trailer. I'm about fifty pages from the end of the book and I gotta say, 'loosely based' appears to be an understatement. I hope it's a good movie, the book is great! I can't wait to read more of Michel Faber's work!