The Dog from 'The Artist' Signs Deal, Proves Publishing Truly in the Dog House 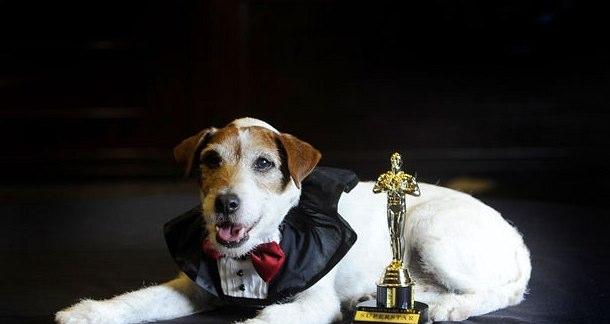 Uggie, who is basically the darling dog of Hollywood right now, pretty roundly has a better life than you. For example, he was a guest at Saturday's night's White House Correspondents' Dinner, alongside Lindsay Lohan and some other famous people. And now, according to a press release from Gallery Books, Uggie is going to release a tell-all autobiography about his rough (ruff? Ugh, I hate myself) life working in show business.

Now, don't get confused--while Uggie does have a mildly interesting life story (he was kind of a crappy dog and was told he'd never work in this town again before a miracle trainer came and rescued him), this isn't going to be an actually interesting book about a dog like Susan Orlean's Rin Tin Tin. Because, unlike Rin Tin Tin, Uggie wasn't a war hero who captured the hearts of millions, and, unlike Susan Orlean, whomever is ghostwriting the book for Uggie (Wendy Holden? Sure.) insists on doing everything in his voice. In the voice of a dog. Because it's a "joke" memoire. Because somehow, that's still a thing.

The book is slated for October.

I mean. who doesn't want a coffee table book with tainted little gems intitled "7 Steps To Get Big Boobs" and other issues.

This makes me want to burn society down.

If it wasn't for the bowtie, he'd look kind of like the Pope.