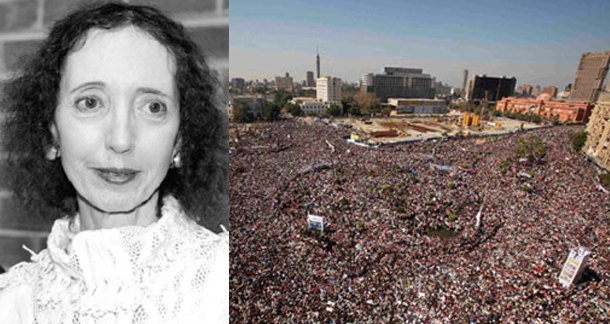 The internet is no stranger to rows, storms and blow-ups of one sort or another, many of them caused by an incautious statement by someone famous, sometimes infamous. Writers are no exception, just look at Bret Easton Ellis. Now, Pulitzer nominated author (twice) Joyce Carol Oates has put her foot in the Twitter cow pie.

After a series of tweets on Friday, a storm erupted over her views on Islam, particularly after she linked rape culture to the main religion of Egypt.

Where 99.3% of women report having been sexually harassed & rape is epidemic – Egypt – natural to inquire: what's the predominant religion?

Oh dear. Giving the incendiary nature of this remark, it’s hardly surprising that Oates’s fellow writers and Twitter users rose up to challenge her on these views with predictable venom. That said, some respondents were quite witty, poking fun at the author. I particularly like this one:

Also somewhat predictably, Oates pulled back a bit later, when she admitted that "Blaming religion(s) for cruel behavior of believers may be a way of not wishing to acknowledge they'd be just as cruel if secular." Too true.

At least we can assume that unlike Ellis, Oates isn’t likely to get drunk and start insulting people anytime soon. Is it right that celebrities of any flavor trot their opinions out and then get slammed for having them? Hell, I post opinions all the time, but this never happens to me…

I certainly think she has a point when she says that this world would be just as misogynist without support of some fancy religious view, but they do use Islam predominantly to justify their hatred of women there. So I say it’s all fair and well to say that Islam = Sexualised Violence.
I'd say bravo for being courageous enough to stand up to your views Carol (mind, it's not as if you had to fear loosing any important readers at this point in your career).

Interestingly I came only recently upon a blog post by a Romance author wo posed the view that authors should refrain from adding their voice to political discussion - to which I'd say, nonsense, if you have an opinion you feel is right, then voice it, and never, never!, let yourself be silenced by something as trifling as fear of loosing the respect or your readers, and thereby them as customers.

Joshua Chaplinsky from New York is reading a lot more during the quarantine July 10, 2013 - 8:32am

I agree, the world would be just as horrible and misogynist without religion, but unfortunately a lot of people use it as a justification for oppression, and Islam seems a tad more rapey than the rest. Sucks for people of faith who get lumped in with the jerks.

But I'm sick of the back-peddaling. If you are going to say something like that, say it right the first time, and stick to your guns.

Religion was invented to justify the existence of terrible things. Unfortunately, the definition of terrible varies from one culture to another. To me, terrible is the loss of a loved one. To others, terrible is not being able to rape or oppress with abandon.

Religious dogma is informed by the culture that invents it. Not the other way around.

So, how is it we know so certainly that a secular culture would be just as reprehensible in such a way?

Are we saying human nature is intrinsically vicious? Meh.