TV Series Based on 'Girlfriend in a Coma' in the Works. Also, Douglas Coupland Designs Writer-Friendly Furniture! 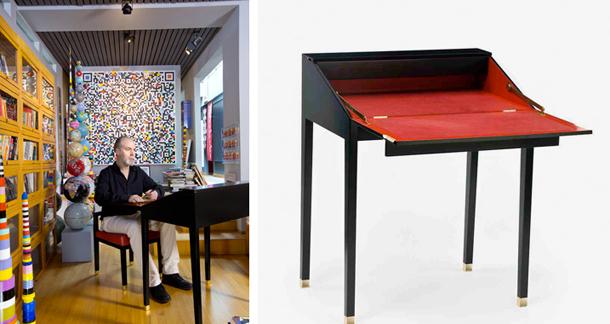 Entertainment Weekly reported on Friday that NBC has green-lit a pilot for a TV series based on Douglas Coupland's 1998 novel Girlfriend in a Coma. There aren't many details about the potential series as yet, but Nurse Jackie co-creator Liz Brixius pitched the pilot, and will no doubt write the first episode.

Christina Ricci is on board to play Karen, the titular character who awakens from a seventeen-year slumber to discover she has a daughter. A long-running TV series seems like a good fit for Girlfriend, since it not only explores Karen's life post-coma, but the lives of her boyfriend/baby-daddy Richard and all her high-school friends. No air dates have been announced yet.

In other Coupland news, the author recently launched a furniture collection designed with writers in mind. Before Coupland wrote novels, he attended design schools in British Columbia and Japan, with eyes on becoming a sculptor and interior designer. He's now partnered with home furnishing company Switzercultcreative to produce five pieces modeled after his own writing space: an escritoire, a writer's chair, a bookshelf, a table lamp and a standing lamp.

Coupland admires the escritoire most. Speaking to Wallpaper Magazine, he said, "Escritoires are elegant: with one flip of a lid I can conceal mountains of crap inside while everyone looking on thinks I'm this really together stylish person."

Who here would buy writer-designed furniture? Who likes Christina Ricci in Girlfriend in a Coma? Coupland thoughts in general?

I know, I know, it's really serious.

Joshua Chaplinsky from New York is reading a lot more during the quarantine February 12, 2013 - 12:25pm

Girlfriend In A Coma is my least favorite Coupland and I am not a fan of Ricci.

This news makes me giddy, but I worry that in picking up Girlfriend in a Coma, NBC is just trying to cash in on more dystopian (hedging their bets on Revolution, perhaps?). I think it could make a cool series, but the nature of the story and its ending makes for interesting speculation.

I'm so pleased to see his furniture taking off, as well. Target pulled the plug on a line some years back and I've never forgiven them.