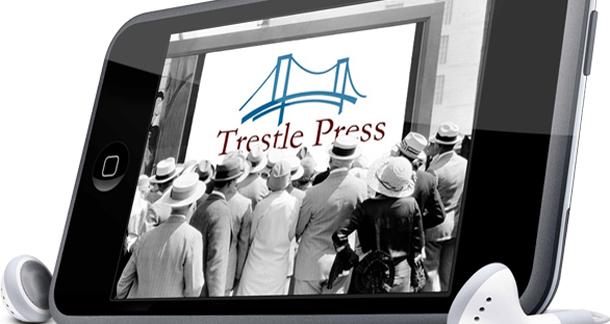 Over a year ago, we reported on the woes of one Trestle Press, who were caught red-handed stealing copyrighted images for their eBook covers. There were some pithy (non)apologies made on the part of Trestle's founder, Giovanni Gelati, and the infringing images were removed. Surely, we thought, the nightmare was over…

But the story didn't end there, and thanks to some Nancy Drew-like sleuthing from author Anne McDonald, we can see the whole picture now. You can read her entire account on her blog, but in a nutshell, McDonald became suspicious of Gelati and his Helping Hand Press, a faith-based publishing venture. After doing some digging, she discovered these lovely tidbits:

So there you have it, folks. Michael Brachelli, aka Giovanni Gelati, aka The Ice Cream Man: known graphics and manuscript thief, indebted to an author for three quarters of a million bucks. I'd advise against sending this guy any work.

Anyone have horror stories with this guy you'd like to share? Or how about publishing scumbags in general?

I wonder why the plaintiff is supposed to get so much money.

That's crazy. Thought they were long gone. Signed with them for a novel about two years ago, couldn't spell my name right, no matter how many time I corrected him, took one look at the first edits, and asked for my contract back. I got but damn, 750.000? They will never get that money. He doesn't have it..

Unfortunately my next publisher wasn't much better, had to leave them as well.

Maybe I should I stick around somewhere long enough for a chance at money like that.

The misuse of cover art sounds like this guy who self-published more than 150 public domains works under the Pulptastic name at Amazon, stealing artwork from movie posters, DevientArt, actor stills. He took PD short stories, changed the detective's name to Poirot, and published them under Agatha Christie's name. He ransacked the League of Extraordinary Gentlemen comic books and publish the PD novels that referenced them under the LEG name. He was quite the inventive thief.

wow. insane. had no idea he was so screwed up. i've been avoiding him for a long time.

the only other major jerk to avoid that i can think of is Anthony Giangregorio: