Trapped in the Closet - R. Kelly Writes the Book 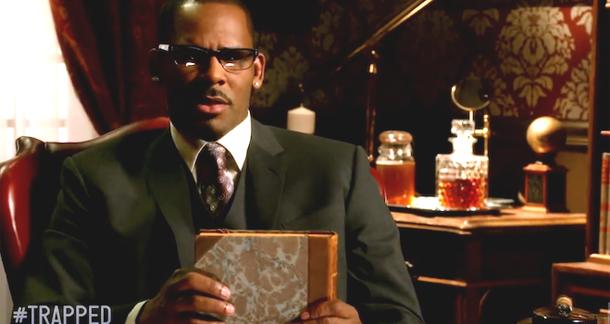 When R&B artist R. Kelly released “Trapped in the Closet: Chapter 1” in 2005, a lot of people thought it was a joke because it felt more like a soap opera than a music video. But that was only the beginning. Fast forward to 2012 and he’s just released another ten chapters of the insanely popular series, bringing the total to 32, so far. And now he has plans for a book and a Broadway musical version of the story.

Described as a “twisted tale” by some, it tells the story of Sylvester (played by Kelly in the videos, whose middle name is Sylvester), who has to hide in a closet after a one-night stand with a woman when her husband comes home. The subsequent chapters reveal even more infidelity and lies.

Kelly says the book that appears in the videos is the story of “Trapped…” and that he’s currently writing it, and it will fill in a lot of the back story.

I know where Chuck was before he met Rufus. I know what was happening before they actually met. I know what happened with Bridget and the midget and everybody else’s situation. So I feel like the fans have supported “Trapped in the Closet," so I feel like it’s time to introduce them to these people before what they saw. It’s the prequel meeting the sequel. You’ll get to find out a lot of things you don’t know, or that you can’t know, unless you read the book or unless I tell you--so I decided to do a book on it.

With another 85 chapters to come, this is obviously a franchise that’s going to run for a while yet. While I can’t say I’m a fan, his sales of over 54 million albums so far would suggest he’s got an audience.

They’ll probably buy his book, too. And go to the musical. Who knows? It might be the next Phantom…