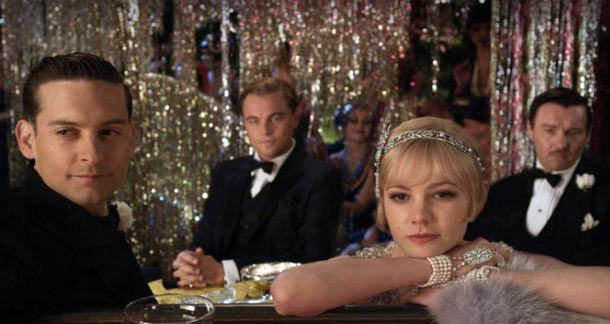 If you're the sort of person who follows developing Hollywood news, you probably heard long ago that director Baz Luhrrmann (Romeo + Juliet, Moulin Rouge, Australia) was writing and directing a new adaptation of F. Scott Fitzgerald's masterpiece, The Great Gatsby. Up until yesterday, the curious, optimistic, and cowering alike were treated to little more than leaked publicity stills, but the cat's officially out of the bag with the release of the first full-length trailer.

The film stars Leonardo DiCaprio as Gatsby, Tobey Maguire as the narrating Nick Carraway, and Carey Mulligan as Daisy Buchanan. It also appears, in typical fashion, to be a very "Baz Luhrmann" project: heavily stylized photography, dream-like sets and sequences, and a curiously period-inappropriate soundtrack (both Jay-Z and Kanye West are featured in the trailer). The film will also be released in 3D.

Despite being called "unfilmable", The Great Gatsby, which was published in 1922, has been adapted seven times since 1926, including Luhrmann's latest offering. Perhaps the most notable attempt was made in 1974 by director Jack Clayton, using a script penned by Francis Ford Coppola and starring Robert Redford as Gatsby.

Does the new film look like a step in the right direction, or a heinous misfire? Watch the trailer and speak up in the comments!

I'm always too sceptical about adaptations. When I was reading the book, my image of Gatsby was quite different from Leo. Actually I can't say I'm dissapointed with the cast, but still. Need to see the film first, it's too early, I guess, for any conclusions.

Baz Luhrrmann is one of those sensationally irritating directors who are happy to disappear and leave the world alone for a few years before suddenly screaming "HEY GUYS LOOK I'M BACK LOOK WHAT I DID THIS TIME!!!" and it's never very interesting and you just have to put up with it until he goes away again.

That said, I'll probably be asked to join someone to watch it. I hope I can say no. I hope it's not going to be a date.

They can't all be directed by Jerry Bruckheimer or J.J. Abrams, so Baz will just have to do. The trailer kind of makes it look like Rouge mixed with Brazil (or maybe that's just the bed scene making me think that). I'd see it if it was directed by a gerbil, though, so pretty much all my dogs are in this fight because I want so badly for it to be great.

Joshua Chaplinsky from New York is reading a lot more during the quarantine May 23, 2012 - 3:06pm

I hated Romeo + Juliet, really liked Moulin Rouge!, didn't see Australia. I'm not a literalist who needs the book to be adapted word-for-word, but I don't know about this. I'm not digging the non-period specific music. I will say, though, I think this is a great use of 3D. Visually the film looks amazing, and it would be cool to watch something in the format that isn't giant robots beating the shit out of each other or Werner Herzog in a cave (which was actually pretty great).

Also, why does DiCraprio insist on doing a terrible accent IN EVERY SINGLE MOVIE HE'S IN?!?!

I'll be honest, I think it looks awesome.

I will definitely see it. Loved the book. I've never been a big fan of DiCaprio, at least until some of his recent movies. I didn't like Romeo and Juliet. But I will give it a shot out of love for Gatsby.

I guess I'm odd man out. I loved Strictly Ballroom, and liked Romeo & Juliet, and then hated Moulin Rogue and loathed Australia...so that descent does not bode well for Gatsby...

I do like DiCaprio and Mulligan very much, so that's good at least. I don't know, it looks beautiful but it looks like all spectacle, no substance. :(

I adore The Great Gatsby, and that will force me to watch this.  It will also force me to be let down by it.  Because it won't be my perfect vision.  I know this, because Tobey Maguire does not reside in any of my perfect visions of anything.  Ever.  That said, I think DiCaprio will probably do a fair job as Gatsby.

The movie will never live up to the movie you have created by reading the book but I am still looking forward to see how one of my favorite novels was interpreted by someone else. At least they signed good actors

I hated when Robert Redford did it and he put such an emphasis on the 'old sport'.

Hating on it is such a hip thing to do.

@Josh: Are we talking about specific movies in which his accent is bad...or all movies? Because the only ones I'm thinking of right now sound pretty good to me...?

Joshua Chaplinsky from New York is reading a lot more during the quarantine May 24, 2012 - 2:44pm

His accent on Growing Pains wasn't that bad.

The accent in Shutter Island is terrible.

@Josh: Hmm. I didn't see Shutter Island or Blood Diamond (though from the snippets I've seen of the latter I would agree with you) but his accent in The Departed didn't bother me.

Joshua Chaplinsky from New York is reading a lot more during the quarantine May 25, 2012 - 7:46am

This makes me worried for Django Unchained. Hope DiCaprio can do Southern Racist.

To be rich enough to afford fanzy cars and enough alcohol to get drunk enough to crash them.

I'm currently in an NYC craze...love/hate relationship with the movie so far because of the bad trailer.