Trailer for James Franco's 'As I Lay Dying' Released 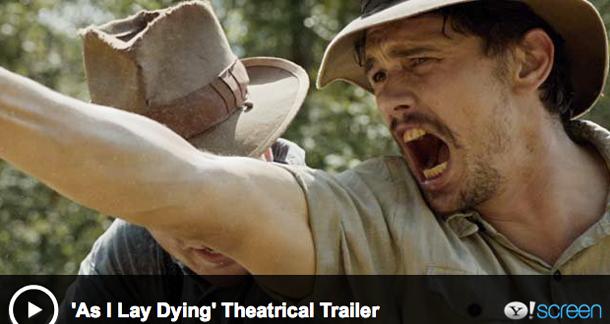 Almost a year ago, we here at LitReactor reported that James Franco was set to film an adaptation of William Faulkner's 1930 "tour de force" As I Lay Dying. Well, the crazy SOB actually pulled it off, and now there's a trailer to prove it! You can watch it over at Badass Digest.

There's a distinct horror vibe to this trailer: low, droning strings escalating to an unnerving crescendo, the creepy, pale-faced kid's monotone voice over, all the shots of Franco, Danny McBride, Time Blake Nelson, and the rest looking either worried or horrified, and all the glimpses of terrible things that occur throughout the narrative. Admittedly, I've never read the book, so I can't speak to the appropriateness of the trailer's mood, but it looks interesting. Perhaps Franco really knows how to do Southern Gothic properly.

The film is currently competing at the Cannes Film Festival. There have yet to be any official release dates set.

Who's excited about As I Lay Dying: The Movie?

Joshua Chaplinsky from New York is reading a lot more during the quarantine May 14, 2013 - 8:17am

I didn't think I would feel this way when the news first came out, but after trying to stomach Franco's student film on Hart Crane, I'm going to be going into this with very low expectations.

Dorian Grey from Transexual, Transylvania is reading "East of Eden" by John Steinbeck May 14, 2013 - 5:14pm

I guess I'd have to have read the book to judge it properly but it doesn't look all too bad. I understand the skepticism, though, with making a movie out of a Faulkner book, having read The Sound and the Fury for school.

I hated this book. It looks pretty accurate as an adaptation though, and I kind of like the look of the cast. They fit really well with the book.