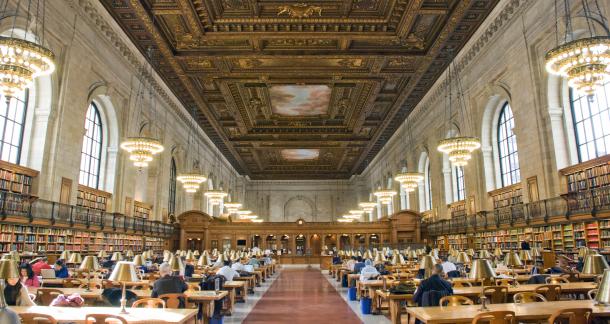 New York Public Library released a list of its most-checked-out titles, and even better, the list is broken down by branch. You can read the full list here, but let's look at some highlights.

Manhattan, Chatham Square: Lao fu zi si ge liu ge by Ze Wang. A Chinese-language graphic novel whose title (Google) translates to "Old Master fourfold six grid." I can't tell you anything else about the book. What I CAN tell you is that Chatham Square is a major intersection in New York City that sees eight different streets all come together. What I can also tell you is that, if you're an English speaker, visit a library that caters to other languages. It's absolutely fascinating. And all you have to do is walk in the door. Highly recommend.

Staten Island, Great Kills: Kitty Genovese: The Murder, the Bystanders, the Crime That Changed America by Kevin Cook. A true-crime title, pretty fitting for a library called "Great Kills." Great Kills Library sounds, to me, like an archive of Call of Duty gameplay videos. That aside, the book chronicles the murder of Kitty Genovese, one of the darker, more psychologically-frightening events in recent history.

Brooklyn, Park Slope: Not That Kind of Girl by Lena Dunham. Makes sense, right? I suppose if someone did a TV show about my home town, I'd probably read her book. Not to mention it's a pretty popular title on its own. I do wonder, however, if New York books are popular in New York. I mean, it seems like about 50% of media takes place in New York. It seems like that to someone who doesn't live there, anyway. So how would a New Yorker keep up with New York stuff? Does the setting becomes less exciting and special? Or, perhaps, is it done badly so often that it's even more exciting when someone gets it right? Any New Yorkers have some insight?