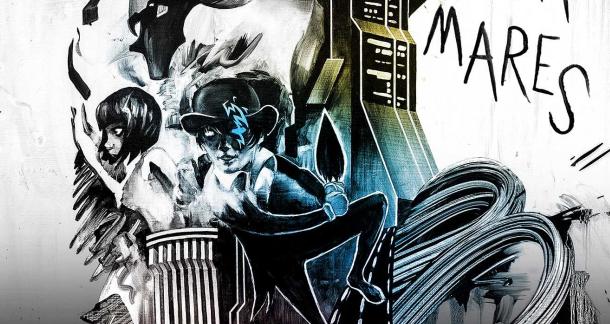 Blink-182's Tom DeLonge released his first YA novel, Poet Anderson...Of Nightmares on Tuesday. It's the first in a series of 3 novels, and DeLonge has announced that once he's finished, he'll move on to another project. And then another. In total, he's got plans for 15 YA novels.

What is Poet Anderson about? Reportedly, it's...

...a fictional meditation on the power of the subconscious state [that] revolves around a lucid-dreaming character DeLonge introduced with the 2014 animated short Poet Anderson: The Dream Walker.

Wait, what? Let's try another description:

Poet Anderson...Of Nightmares follows the epic journey of two orphan brothers, Jonas and Alan, who are Lucid Dreamers. After a tragic car accident lands Alan in a coma, Jonas sets out into the Dream World in an attempt to find his brother and wake him up. What he discovers instead is an entire shared consciousness where fear comes to life as a snarling beast called a Night Terror, and a creature named REM is bent on destruction and misery, devouring the souls of the strongest dreamers to get closer to the Waking World. With the help of a Dream Walker—a guardian of the dreamscape, Jonas must face his fears, save his brother, and become who he was always meant to be: Poet Anderson.

We have some of DeLonge's travels in Paris to thank for the germ of this idea:

I just thought, Wouldn't it make a lot of sense if there was a character with a bowling hat that lived on the streets of Paris and somehow traversed the tops of the roofs of all of these types of buildings I was staying in?

As for future projects, DeLonge has alluded to the fact that he's in Colorado Springs working with the U.S. Air Force on a project. For some reason.

Poet Anderson is VERY highly-rated at the moment on Amazon, but that may have a lot more to do with DeLonge's collaborator, Suzanne Young, who wrote most of the actual text.

My goal is for Suzanne to be the novelist, for me to be the imaginative inspiration behind it. I'm not a novelist. That's not what I do. I don't lock myself up in a cabin and write with a fire nearby for months at a time.

Young is probably best known for her YA series, The Program.

Regardless of how you or I might take this news, it's clear that DeLonge is..."Feeling This" whole author thing.