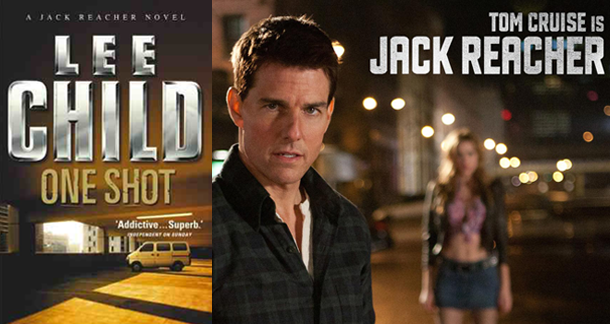 On Monday night, the movie Jack Reacher premiered in London’s Leicester Square and all the stars were there, including the diminutive star, Tom Cruise, as well as the author of the series, Lee Child.

In the books, Reacher is described as 6 foot 5 inches and 210-250 pounds -- which Cruise clearly isn't. Obviously still smarting from criticism by fans of the Reacher novels about his casting, Cruise defended the decision.

You know, he (Child) created the character, I had my own opinion that I didn't say to Lee and then he came back and pretty much reflected what I had felt about it. But had he said, ‘Look, I'd rather not,’ I would not have played the character.

It’s hard for me to judge as Cruise is in no way the picture I had in my head of the drifter from Child’s books. I doubt I’ll pay to see the movie, either. Paramount, on the other hand, is hoping this one is going to be the start of a new franchise featuring Cruise. And as a lot of the target audience will have never read the books, he may well get away with it.

Will you go see it? Will Cruise ‘do’?

Class Director
Rob from New York City is reading at a fast enough pace it would be cumbersome to update this December 12, 2012 - 9:27am

I'm familiar with the Reacher character and the "controvery" but I've never read any of the books. Does Reacher's size really matter? Does his tallness affect the outcome of any of the stories?

I'm not a big fan of Tom Cruise, but ultimately, the studio wants to sell tickets. Tom Cruise is still a big (though short) star and sells tickets. There could have been better casting jobs, but they might not have drawn as much money.

Keith from Phoenix, AZ is reading Growing Up Dead in Texas by Stephen Graham Jones December 12, 2012 - 9:39am

@Rob - Reacher's 6' 3 in the books, a clear foot taller than Cruise. But it doesn't really matter except to the Reacher purists, and they don't really give a shit either.

This reeks a bit of reader/writer snobbery, when in reality, movies often don't get made unless people like Tom Cruise are on board.  And even if it was made with a tall actor with less star power, such movies are less likely to succeed.  Would you rather have 4 Jack Reacher movies with Tom Cruise vs 0 or 1 without him?

For example, I never heard of Jack Reacher and I read nonstop.  I saw the trailer, it looked cool, now I will see the movie and probably buy some books.... which then promotes the book.

Joshua Chaplinsky from New York is reading a lot more during the quarantine December 12, 2012 - 9:56am

Herzog is the villain, and he's plenty tall.  I'm sold.

This reminds me that time when millions of loyal purists refused to go see the Lord of the Rings trilogy of films because Elijah Wood was too tall to play Frodo, and unlike Jack Reacher, the shortness of Frodo and other hobbitses really is integral to their characters.

It's settled. Tom Cruise will be a Hobbit, Elijah Wood will be Jack Reacher. All is better now.

JEFFREY GRANT BARR from Central OR is reading Nothing but fucking Shakespeare, for the rest of my life December 12, 2012 - 12:08pm

This tempest in a teapot is a construct of the secret 'little people' media conspiracy.

You see, in the LP world, non-LPs are referred to as 'reachers'. So this movie is obviously a thinly-veiled attempt to indoctrinate the non-LP world into their nomenclature. First we start thinking of ourselves as 'reachers', then it becomes a part of the lexicon, then cats and dogs start getting married, and BOOM! next thing you know, we're all slaves to the little people.

I've already seen it.  It's a fun action movie with a great car chase in the middle, but the character Cruise plays bears little resemblance to the Jack Reacher in the books.  It's not that Cruise is too short (although he does manage to walk through a bar in one scene where he towers over all the extras), it's that he's unable to convey the fizzing intelligence of Reacher (who has spent a lifetime observing people from the fringes and staking his life on his predictions of their behavior).  Josh is right however in that it's worth seeing for Herzog's villain and a cameo from Robert Duvall.

Ray Richards from Michigan and Iowa is reading The Great Shark Hunt by Hunter S. Thompson December 15, 2012 - 8:07am

Jack reacher is a halarious name. We should take all masterbation jokes seriously.