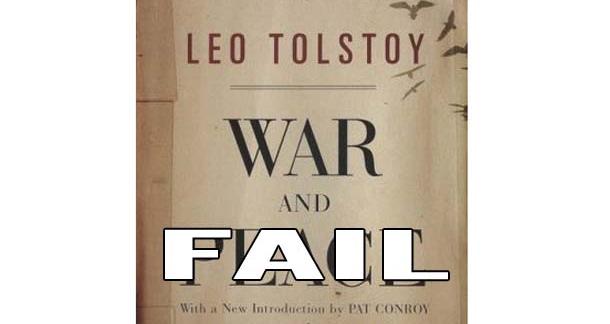 Recently, blogger Philip Howard bought a digital copy of War and Peace from Barnes & Noble for 99 cents. As he was reading, he noticed an odd word: Nookd. Since War and Peace was originally printed in Russian, he chalked it up to a quirk of translation. But by the third time he stumbled across the word, he realized something was amiss:

"Thinking this was simply a glitch in the software," Howard explains, "I ignored the intrusive word and continued reading. Some pages later I encountered the rogue word again. With my third encounter I decided to retrieve my hard cover book and find the original (well, the translated) text."

Turns out, Tolstoy used the word "kindled" at least eight times in War and Peace. And each time, the word had been changed to Nookd. Wait, Kindle is also the name of Barnes & Noble's biggest rival eReader! Is this selective censorship by Barnes & Noble to black out a competitor!? I smell a scandal!

Actually, it was probably just that the publisher ran a quick find/replace when moving the eBook to another online store. Still, funny, and why you should never forget that computers are dumb boxes of wires that sometimes create as many problems than they solve.

Anyone ever stumble across any silly typos like this?

I have to adjust my sense of humor. Nobody around me right now thinks it's as awesome as I do.

I look forward to the day biblical scholarship is sabotaged by a computer replacing "tablet" with "iPad" — "When Moses had carried down the iPads..."

Joshua Chaplinsky from New York is reading a lot more during the quarantine June 7, 2012 - 8:25am

I am with Fylh. This is hilarious. Just golden.