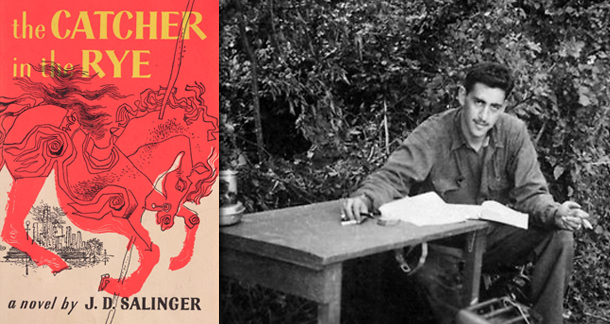 The long-awaited documentary on J.D. Salinger was screened Monday night at the Telluride Film Festival where Shane Salerno, Hollywood scriptwriter and Salinger obsessive, was also on hand to answer questions about the movie and accompanying book.

"Salinger was the hardest thing that I’ve ever done in my life,” he said. “It consumed ten years. Having people speak for the first time was a huge challenge… doors just slammed in your face for the first couple of years, but I was very grateful to finally have people come forward and share their stories.”

Among the things that have come to light—including the above photo of Salinger working on Catcher in the Rye while with the U.S. forces during World War II, and the serious Post Traumatic Stress Disorder he suffered after the war—are the titles of five unpublished works which Salinger had left with instructions for publication:

For generations of The Catcher in the Rye devotees, the main protagonist Holden Caulfield will be rolled out in a short story sequel titled The Last and Best of the Peter Pans, more than half a century after Salinger wrote it in 1962…

A Counterintelligence Agent’s Diary about his time interrogating prisoners of war when he served working in the counter-intelligence division;

A World War II Love Story based on his brief marriage to Sylvia, a Nazi collaborator, just after the war;

A Religious Manual detailing his adherence to Ramakrishna’s Advaita Vedanta Hinduism, the religion he turned to later in life;

and The Complete Chronicle of the Glass Family featuring five new short stories about his recurring character, Seymour Glass.

It’s rare to find so much unpublished work by an author, particularly in the 20th and early 21st centuries, and these works will provide new grist for the mills of Salinger scholars. Will this appeal to a whole new generation or just those who are fans of Salinger’s already published work? Time will tell.