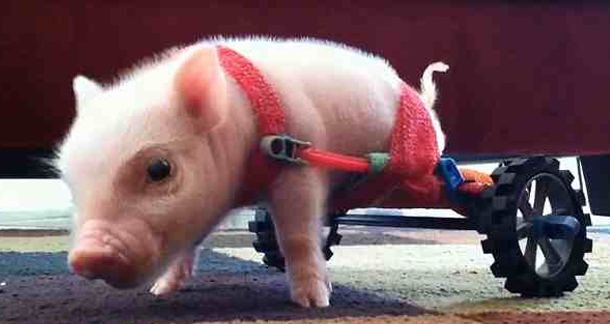 It's getting harder and harder to get a book deal these days, as proven by the increase in and allure of self-publishing that has overtaken the industry. There are still deals being done, but what you're writing (or selling) has to be different or already drawing interest. Like Grumpy Cat getting a movie deal, for instance. Who'd have thought that? Well, now there's likely to be even more gnashing of teeth amongst aspiring authors as a pig in a wheelchair named Chris P. Bacon has just secured a 3-book deal with Hay House.

Chris P. Bacon, the pig in a wheelchair who quickly became a YouTube sensation in early 2013 with over 1.2 million views, is setting out to teach children about compassion, acceptance, and loving your imperfections. Chris P. Bacon was rescued by his veterinarian Dr. Len Lucero after a young woman reluctantly dropped him off to be euthanized because of a congenital defect that affects his rear legs. Dr. Lucero gave Chris a second chance at life and with two wheels strapped to the rear of his body, he is now a perfectly healthy and happy piggie on-the-go.

Dr. Lucero, Chris's 'dad', will be working with Kristina Tracy, who's co-authored children's books with the likes of Deepak Chopra and Wayne W. Dyer. "Kids can undoubtedly learn a hell of a lot more from a big-hearted handicapped pig than they can from the likes of their other examples (Justin Bieber anyone?)". Too true. Lucero hinted at some of the things they'll be covering, saying:

It's got a lot of parts to it. My story with him, a story of compassion. His story is about overcoming obstacles and then finally perseverance.

Awwww... who can say anything bad about a cute little pig on a skateboard? The question I have to ask though is will it only be this kind of internet celebrity that gets a book deal in the future? If so, I'd better go find some kind of animal with a schtick I can market...

And if you need a dose of cuteness, you can see the little pig in action here:

Joshua Chaplinsky from New York is reading a lot more during the quarantine June 7, 2013 - 10:05am

I WANT A TEACUP PIG SO GODDAMN BAD!!!

Three books? How many interesting things does a pig actually have to talk about?

[Oh my.  My duty as self-appointed culture-critic calls me to now exegize this story.]

What does this "say" about "America"?

Umm.  Nothing.  It only speaks of the executive decisions taken by a few select individuals.

Duck Dynasty vs Animal Farm:  Who would win?

I can't handle the cuteness of that pig. I just want to cuddle it, which is probably not a good idea. That said, I don't think I'll be buying any books about it. Good for Dr. Lucero though. I hope he is able to accomplish what he sets out to do.

I can think of worse pitches for a children's book.

Dwayne from Cincinnati, Ohio (suburbs) is reading books that rotate to often to keep this updated June 9, 2013 - 4:48pm

Maybe I'm just mean, but he made it onto the list of animals I want to eat.