This Is Horror Unlocks 'The Elvis Room' by Stephen Graham Jones 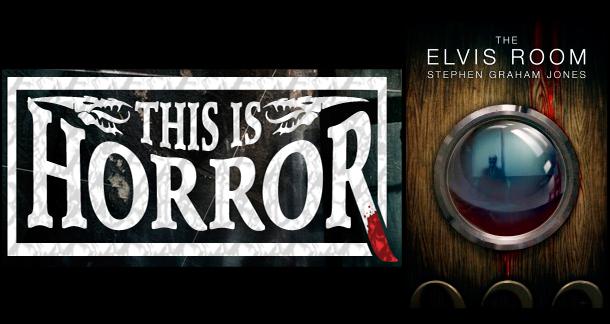 The year is barely a quarter over and this is, what, Stephen's third, fourth release? Are we even surprised anymore? If Stephen is the mechanical rabbit on the dog track of your career, I hate to break it to you — you're never going to catch him. And even if you do, you're just going to hurt your teeth chomping on his metallic hide, because he's a machine.

This time he's teamed up with the fine folks over at This Is Horror, whose series of chapbooks have been putting hairs on chests for a while now. (Even the ladies!) From their website:

What if you weren’t looking for evidence of the supernatural, but found it all the same? A true research scientist can either hide that evidence or tell the world. Either way it’s going to haunt you. Either way your life is never going to be the same.

Find out what’s always on the other side of the door.

Zak Bagans, eat your heart out.

The Elvis Room is yet another example of why Stephen is not to be trusted. He knows too much about what scares us, and his portrayal of that fear is more vivid than our own nightmares. I should know, I've read it. You think the living get pissed when their favorite hotel is overbooked? They've got nothing on the dead.

You can preorder this bad boy through the This Is Horror shop. You can also subscribe to their quarterly chapbook series and save money (which you will probably need to spend on extra underwear). The official release date is March 31st. You've been warned.

Tony McMillen from Mostly glorious Tucson Arizona but now I live near Boston. is reading Not, I'm writing March 14, 2014 - 10:19am

If Stephen is the mechanical rabbit on the dog track of your career, I hate to break it to you — you're never going to catch him. And even if you do, you're just going to hurt your teeth chomping on his metallic hide, because he's a machine.