'The Writer' Magazine Goes On Hiatus After 125 Years 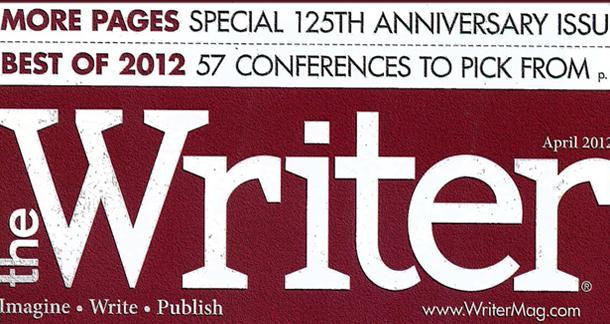 The Writer magazine's website features a cheerful press release about the publication's 125th anniversary. The release lists some of the authors who have contributed (Ray Bradbury, Patricia Cornwell, Jonathan Franzen, Gail Godwin, Pete Hamill, Stephen King, Sinclair Lewis, W. Somerset Maugham, Terry McMillan, Joyce Carol Oates, Anne Perry, May Sarton and John Updike, to name a few) and boasts that it is among the oldest continuously published consumer magazines in the United States. The editor's note from the milestone issue invites readers to "celebrate with us." (Download a PDF of the entire first issue, which promises to be "helpful, interesting and instructive to all literary workers.")

All that merriment makes the news that the iconic magazine is going on hiatus even more depressing. Gallycat reported that The Writer's contributors received an email this week from editor Jeff Reich stating:

I’m sorry to announce that The Writer magazine will go on hiatus after the October 2012 issue, which is in production now. Kalmbach Publishing Co., which owns The Writer, is currently looking for a buyer for the magazine, and our hope is that The Writer will re-emerge under the careful stewardship of a new owner.

We all know that "going on hiatus" is just a euphemism for "goodbye cruel world," but maybe they'll luck out and find a buyer. I hope so. After spending a decade as an editor and writer for various print magazines and watching in horror as the industry I loved started to crumble, I'm not surprised by this news but I am saddened. I wasn't even a subscriber of The Writer (part of the problem), but I feel like every time a print publication goes under or "on hiatus" a winged unicorn gets stabbed in its beautiful rainbow heart by the horn of another more aggressive unicorn who has anger issues. Or something. It's bad anyway.

Anybody else feel as bummed about this as me? One-hundred and twenty-five years is a long run. Which magazines, if any, do you guys subscribe to?

This just tears me up. I have always loved The Writer and have appreciated their quality content and eye toward professionalism and ethics in all matters of the publishing industry and craft. At least there is still Poets and Writers.

Jane Wiseman from living outside of Albuquerque/in Minneapolis is reading Look to Windward by Iain M. Banks July 31, 2012 - 3:24pm

Right now, the only print magazine I subscribe to is Poets & Writers. I've mostly migrated to the web for that kind of reading. (Articles like this!)

Umm...I have a subscription for the next two years...

This is bad news.

I subscribe to The Writer and The New Yorker.

The only thing I subscribe to now is Mental Floss.  All others had to go by the wayside.  But I did regularly purchase it when I could.  Which isn't often anymore.

@Jack Campbell Jr. Uh-oh. Maybe the editors will send you a photo of them weeping into their ramen noodles in exchange for keeping your sub money?

@writinggasgjjensen Mental Floss is the bomb, and the folks who run it are super nice too. I'd cry if anything happened to it.

If they all autograph the photo, I'll take it. I would really rather the magazine stay in business. I've always liked it more than Writer's Digest or Writers and Poets.