The Return Of Holden Caulfield 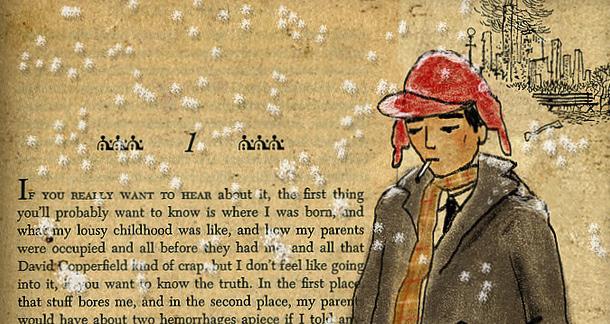 If you've been wondering what Holden Caulfield has been doing for the last sixty years or so, your wait is almost over. And you might be pleased to know that J.D. Salinger's icon of teenage angst hasn't aged a day. Mary O'Connell, best known as a YA author, has penned an adult novel about a high school girl who runs into the Catcher In The Rye protagonist while searching for her literature teacher in New York City. According to the The New York Times, the book, In The Rye, has been acquired by Amy Einhorn Books (an imprint of Putnam).

It's not clear how O'Connell cleared the rights with Salinger's notoriously protective estate. His family has been extremely protective of the author's legacy, attempting to ban t-shirts and merchandise featuring his face and filing lawsuits to block books and movies that draw inspiration from Salinger's works. Most recently, in 2011, the estate prevented the U.S. publication of 60 Years Later: Coming Through The Rye by Swedish author Fredrik Colting (aka John David California). The book's protagonist, Mr. C, was an elderly version of Salinger's most famous character. On the bright side, by almost all accounts, American citizens were fortunate to be spared from the book.

Are you interested in catching up with Holden, or is anyone other than Salinger just a phony?

It takes audacity to jack both an iconic character and all but one word of the original title for your own story.

I saw the title and I thought "isn't this just fan fiction?" I suppose the thing it has going for it is that the estate approved it. That piques my interest. Probably not enough to buy the book, though.

Dino Parenti from Los Angeles is reading Everything He Gets His Hands On October 16, 2012 - 2:31pm

The irony here is that Holden would not approve of the exposure--of such a take-off on his life. The kid detested phonies and inauthenticity. Now if she's rewriting him as a version of Holden born within the last twenty years however...

That partial paragraph in the picture is all I've ever read of Catcher.

Based on all available evidence, I'm pretty sure my book will be better.

Just sayin' is all.

And yes: every sentence of my book will have the word "all."

It is very difficult to say that this, borrowing characters or doing a retelling, is a modern concept. Shakespeare was notorious for taking other works and re-writing them or expanding them to create his plays. His characters are often the same as the original. Chaucer did the same with his writings: Troilus and Criseyde, anyone? Let us not forget the Marlowe version of Dr. Faustus and the Goethe version, Faust. We can also point the finger at any book or story that takes from folklore, legend, mythology, or a re-imagining of real events. It is sort of impossible to know if the books are worth reading... unless we read them. Very few can stand up to the original, but there are some that surpass the original.

Yes, that was me spewing blasphemy in the holy church of writing and authorship. To follow that, I shall say this: There is nothing new under the sun. Everything has been done before.

JEFFREY GRANT BARR from Central OR is reading Nothing but fucking Shakespeare, for the rest of my life October 16, 2012 - 11:14pm

Hah. You didn't just compare Chaucer, Marlowe and Shakespeare to Mary O'Connell. Are you going to applaud the Evil Dead reboot too?

Everything has been done before.

Depends on how you define "things."

I wasn't comparing her directly, Jeffery, as I do not even know who she is. I was talking about the over arcing concept of using other people's work in creating your own. No, I do not applaud any film reboots. You do not know me, therefore, you would not know that I hold a degree in Film, as well as a degree in English and a degree in Secondary Education. Do not assume things about others simply because they have a differing opinion from your own.

And by the way, Marlowe was a really shitty playwright and poet. People disagree with me, he would not be studied if everyone thought he sucked, but that is the point of discourse.