The Results Are In: GoodReads Announces Choice Awards Winners

News by Christopher Shultz December 6, 2012
In: 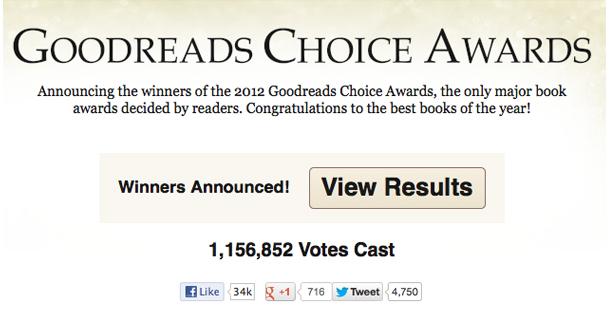 Touted as "the only major book awards decided by readers," GoodReads have announced the winners of their third annual Choice Awards. J.K. Rowling claimed the Best Fiction prize for her grown-up book The Casual Vacancy, proving once again that lukewarm critical receptions don't necessarily dictate the opinions of audiences. With 11,525 votes, Rowling's novel handily beat out Junot Díaz's This Is How You Lose Her and Michael Chabon's Telegraph Avenue.

GalleyCat has a nice list of all the top winners, with links to samples of their books. Here's a less schmancy rundown of the front runners:

Who voted in the GoodReads Choice Awards? Was your voice heard? Were there any authors overlooked? What was your favorite book of the year?