The Pen That Fights Flu? 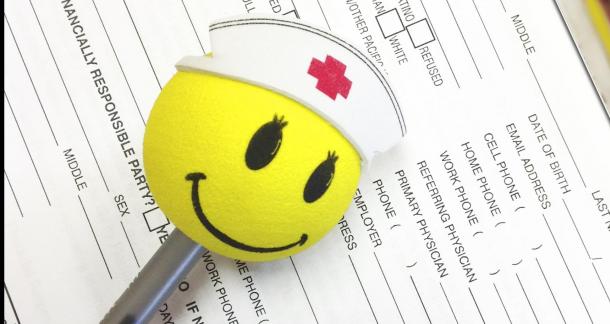 When I read that a Texas school had taken an innovative step in stopping the flu, my bias came up right away.

In my mind, Texas is all about ranches and oil and people who aren't afraid to get their hands dirty.

But sure enough, one school in Texas has taken to using Cleanpen, a pen sanitization system, to reduce absences in cold and flu season, and in fact this little pod of clean has reduced the need for substitutes by 20%. Or, rather, the need for substitutes has gone down 20% while the Cleanpen has been in use. A key difference exists in those two statements, one that an educator should probably be aware of.

The Cleanpen is a...pod. It's mounted to a surface, and then a pen can be passed through a hole on one end of the pod and out the other. While the pen is inside, it passes over a sponge with sanitization gunk of some kind.

The Cleanpen web site will definitely be happy to freak you out with stats on just how much bacteria exists on your average shared pen. 2,400 germs per square inch, as opposed to a toilet seat which has 54 germs per square foot.

So if you were to ask me, I’d rather eat off a toilet seat than a plateful of pens.

A single Cleanpen unit runs $40, plus a 12-pack of refill sponges for an additional $32. The web site says the sponges need to be replaced every two weeks, so by my math we're talking around $100 to operate one of these units for a year.

A little more math, that cash could also buy you about 1,300 Bic pens. Which means you could go through 3.6 pens per day and still make it through the entire year.

Last bit of math. With 125 Cleanpen units in the school, we can safely assume we're talking about $12,500 being spent on pen sanitization in one school.

Or, you could buy 282,096 Clorox wipes. Which, you know, can work on any surface, including pens.

Joshua Chaplinsky from New York is reading a lot more during the quarantine April 7, 2015 - 1:35pm

Hi Peter! Great Article, but I can address the math a bit. :)

The cost of our program is +/-$2 per child for the first year. It drops to $1.50 per child the following years. The Whole Year!

Also, if you can get your article 1,000,000 likes, I will gladly post a video of me eating a steak off a toilet seat. There, I said it. No going back now. Good Luck!