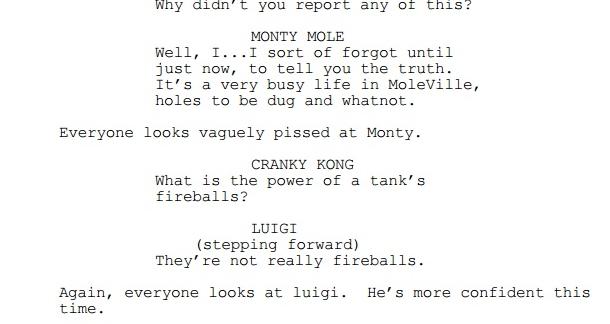 This is not a movie, it’s a manifesto.

Max Landis, a screenwriter best known for his work on Chronicle, has posted a 436-page script he wrote for a Super Mario movie several years ago.

You can read the entire PDF here.

In his introduction, Landis is candid about the shortcomings of his script. The length, for one. The final boss battle is 50 pages, and if we're going by the average of one page of script equaling one minute of film, we're talking about a seriously long movie. About two Lord of the Rings movies slapped together.

Landis talks about the process in pretty sensible terms and provides some good, writer-ly advice:

I did not start out as a good writer, and have never met anyone who did. In fact, most people never even become good writers, by my standards, because they don’t do it enough, hone it again and again, they don’t have that enthusiasm that makes them want to not just “sound smart” or “sound cool” but to engage the reader and tell the fuck out of a story.

From the introduction, the most exciting and intriguing criticism Landis makes of his own script:

Funky Kong plays a major role in this movie.