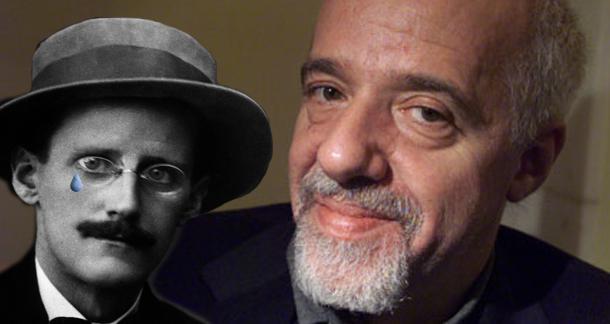 There's nothing like dissing famous pieces of literature to instigate some critical discussion.  And recently, Paulo Coelho shared his feelings on a classic.

The author, famous for The Alchemist (which has sold over 65 million copies), told a Brazilian newspaper that Joyce's seminal work was harmful to literature. After justifying his own popularity, he threw down the gauntlet: "One of the books that caused great harm was James Joyce's Ulysses, which is pure style. There is nothing there. Stripped down, Ulysses is a twit."

Sadly, Joyce has been dead for over 70 years, so we shouldn't expect a scathing reply anytime soon—but several notable authors have been coming to Joyce's aid, defending the classic book and calling Coelho dumb, and stating that his opinion of Joyce insults readers. While this could seem like Coelho being an ass, I'd like to think that this might motivate the general public to read Ulysses and come to their own conclusions.

What do you all think?

That's adorable. Coelho — the undisputed and celebrated master of platitudes and self-help fiction — bashing one of the most influential (if unread) novels ever written.

Having never read any Coelho, or even heard of him, I'll reserve judgment. Ulysses... it's been too long. I was a much younger man. But hell, if it gets people to read it, I'd say that's good. One guy calling something crap isn't generally a big deal, so maybe a little dustup will get some folks to go buy a copy. You can still find it everywhere, so however bad he thinks it is, it's certainly passed ye olde test of tyme.

Ulysses is my favourite book.

I used to become very upset when people told me they hated Ulysses. I would argue with them for days, weeks, every time I would see them. I had to get it through their thick skulls that they were so very, very wrong. And they had no souls.

And then I studied wine (not a metaphor - I actually took sommelier classes). I learned something very valuable - you could stumble across a wine that was crafted to perfection - the climate was perfect in its growing season, the grapes were picked at the precise Brix, the skins were broken with love and care, to extract the optimal amount of flavour, the juice was poured into tanks set inside a room kept at the optimal temperature, and the wine was stored in oak barrels for the exact number of days it needed prior to bottling. You can even detect all of those things in the glass when you take your first sniff, swirl, and sip. But there will be someone out there who will hate it. Not because of how it's been crafted (to perfection) but just because. There's something about it that they don't like. (Those people are called critics.)

There's always going to be someone out there telling me that California Chablis is the best wine in the world. And that's good for them. You can explain to these same people why a Chablis from France is a wine of superior craftsmanship, but they don't want to hear it. They've made up their minds, and their tongues prefer the stuff in a box at the gas station. It's who they are.

or, to quote the great musician, deadmau5, "Haters gotta hate."

I expect a spike in the sale of Ulysses; nothing sells a book like bad press. Just look at Fifty Shades of Gray.

I actually haven't read Ulysses (yet) but I did read The Alchemist a couple years ago, and I hated it. Maybe now I wouldn't think so, but I remember it as being a total piece of crap.

Joshua Chaplinsky from New York is reading a lot more during the quarantine August 8, 2012 - 6:42pm

I once said the same thing about Ulysses without reading it or meaning it.

Too bad Hemingway isn't around to kick Coehlo's ass.

"I expect a spike in the sale of Ulysses; nothing sells a book like bad press. Just look at Fifty Shades of Gray."

I never thought I would ever see those two titles mentioned so closely together.

Dino Parenti from Los Angeles is reading Everything He Gets His Hands On August 9, 2012 - 10:29am

I'm willing to bet Ulysses revealed to him some dark, honest truths about himself that he'd rather subjugate in his own work through mawkish sentimentality.

Literature is such a weak little pussy. Though to be fair, Ulysses is a pretty decent sized book, has sharp edges, so if you throw it hard enough who knows.