"The Girl With the Dragon Tattoo" Gets Its Own Clothing Line 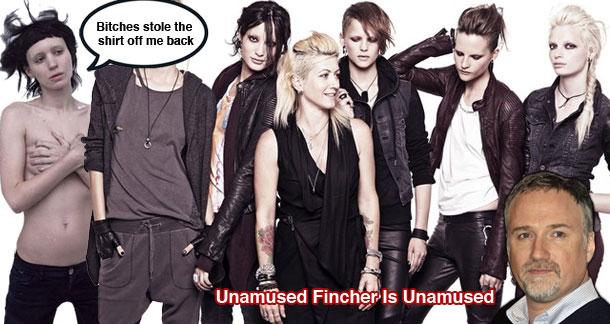 Take off the non-prescription secretary glasses and scrub the Sharpie mustache off your finger.  A new trend is coming your way.  H&M is dropping the new Lisbeth Salander line courtesy of Trish Summerville, the costume designer for The Girl With the Dragon Tattoo film.  It's going to be thirty pieces of anti-heroine badassery consisting of leather motorcycle jackets, chunky shoes, and all sorts of accessories that'll have the boys thinking you've got more than just a few unpaid parking tickets on your record.  Avoid ordering dessert wines, mimosas, and girly shots such as "Last Night's Mistake" or "I Hope He Calls" and you might just pull off the look.

Methinks this is a pretty decent idea considering what little mind the fashion industry traditionally pays the world of literature.  Granted, there's sort of a "selling out" vibe, but this is a breath of fresh air when you consider all the Snooki crap we're inundated with.  It's a step in the right direction anyway, so thanks to H&M for giving it a shot.

The collection will be available at 180 select H&M stores starting on Decemeber 14th, and of course, you can always order online at their official website.  The Girl With the Dragon Tattoo, directed by David Fincher, opens nationwide December 21st.

If David Fincher is directing this and they are coming out with this clothing line, why wasn't there a Fight Club trend with the youngsters, black eyes and split lips as the new fashion trend. It would have toughened up those dirty, little hipsters.

You are the all-singing, all-dancing clothing from a book.

Joshua Chaplinsky from New York is reading a lot more during the quarantine October 28, 2011 - 10:47pm

Definitely feels a little sell-outy, but I doubt The Finch had anything to do with it and I'm still super pumped to see the movie.

As for the style, I don't know if your average Jane could pull it off, but put Rooney Mara in that shit and I'm her slave for life. I'm amazed how she went from the bookish cutie-pie of The Social Network to punk rock sex kitten. I'd let her anally violate me like I was Advokat Bjurman any day.

Why are the (very talented) columnists always talking about sodomy?

Admin
Mark from Lexington, Kentucky is reading The Chronology of Water October 29, 2011 - 5:15pm

Why are the (very talented) columnists always talking about sodomy?

This is all the pirate breed of journalist knows:  rum, sodomy and the lash.

Joshua Chaplinsky from New York is reading a lot more during the quarantine October 29, 2011 - 9:45pm

Where else have we referenced sodomy?

Lisbeth Salander is one extremely hot chick with British flair in style so becoming to her petite bodily frame. What an idea to use her image of couture in a purchasable line. At best, this improves on the idea that "Jesus is coming soon-doom."

Lisbeth Salander is one extremely hot chick with British flair in style so becoming to her petite bodily frame. What an idea to use her image of couture in a purchasable line. At best, this improves on the idea that "Jesus is coming soon-doom."

Granted, I've always had a thing for women that are dressed similar to Lisbeth. ;)

The sources of the internet have been heavily implied for the success of the humans. All the challenges of the sourcing and essay on time reviews have been done for the problematic use of the sources for the youngsters.

This is insane, I really love the idea of this tattoo girl, in fact I did research and she gets a  trademark clothing design for her clothing line. Is it interesting?