The Children's Book That Has Parents' Panties In A Bunch: 'Vegan Is Love' 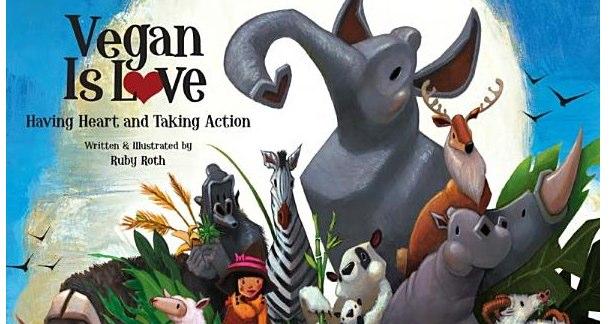 Parents can't seem to agree on what subject matter is "too adult" for kids. Complex social issues like homosexuality (remember And Tango Makes Three?) or race (Huckleberry Finn, To Kill A Mockingbird, etc.) are pretty much guaranteed to end up on somebody's banned books list...but veganism? Indeed! 29-year-old Ruby Roth's forthcoming book, Vegan Is Love: Having Heart and Taking Action already has parents and reviewers shaking their heads and wagging their fingers--not because the book touts a plant-based diet, but because it graphically describes and illustrates inhumane practices within the meat and dairy industries.

The follow-up to Roth's first book, That's Why We Don't Eat Animals, Vegan Is Love features illustrations and descriptions of the treatment of livestock in commercial factory farming operations. And while it's a pretty well-known fact that animals raised for meat and dairy aren't exactly treated like royalty, parents have been quick to decry the "restrictive" vegan diet that's recommended, as well as the illustrations of injured animals and use of words like "violent" and "sad" in the context of a food product that children may encounter. One reviewer even noted that, without adequate parental involvement, the book could result in malnutrition--though, to be fair, isn't that kind of the case with raising kids? That if you don't take care of them, they don't eat properly?

But animal activists (like PETA, who are known for trying to scare and offend the general public into veganism) and Roth herself have come to the book's defense, explaining that the idea isn't to frighten children--but that if the content of the book or the source of the foods in it are scary, then maybe kids shouldn't be eating those foods.

What do you think? Is this book crossing the line, or is it important for kids to know what they're eating? Parents can make up their own minds when the book drops on April 24.

Class Director
Rob from New York City is reading at a fast enough pace it would be cumbersome to update this April 20, 2012 - 12:55pm

How are we supposed to lie to ourselves if we can't lie to our kids?!?

I am all for lying and manipulating kids to get them to eat. Have you ever tried to feed a picky three year old? I tell my youngest if she doesn't eat her veggies, she'll get scurvy and have to go live with the pirates. The last thing parents need is for their kids to have another excuse not to eat. Throw violence into the mix, and now you've got a hungry kid who wont sleep for fear of nightmares.

Seriously though, it would depend on how the author and artist handle the subject matter. There is a way to be honest without horrifying children.

Dwayne from Cincinnati, Ohio (suburbs) is reading books that rotate to often to keep this updated April 20, 2012 - 4:46pm

The biggest single health issue in America is probably obesity due to eating high levels of sugar/high fructose corn syrup. So the obvious thing to attack? Meat. I'm sure the diet they suggest is better then the junk most of us eat, but really it's so pathetic to see that these folks are more worried about how animals live the human children.

Dwayne: I believe the book is less about nutrition, more about the mistreatment, rather gross abuse, of the animals we eat. It's crazy, I know, but apparently animals not only bleed, but they also feel pain.

Dwayne from Cincinnati, Ohio (suburbs) is reading books that rotate to often to keep this updated April 20, 2012 - 9:52pm

I understand that, I just think that people are more important then animals. Especially innocent/helpless ones like children. So if you talk about what humans eat you mention animals being in pain over how children learn to pick out foods you've missed the point.

The key word in your comment, Dwayne, is "think." From an objective standpoint, a human is no more important than a fly. It's only when we start injecting our values that humans rise above the rest; however, values are subjective--a slippery slope into nihilism, I know, but nevertheless ...

Also remember, most people know that high fructose corn syrup has no nutritional value, whereas the average American doesn't know (or chooses not to know) about the abuses of slaughterhouses and factory farming.

Dwayne from Cincinnati, Ohio (suburbs) is reading books that rotate to often to keep this updated April 20, 2012 - 10:48pm

We all are pretty much on the same page about human life being more imporant, some of us just admit it. By being alive you kill animals. Your home takes up natural habitats, the water you drink disrupts fish, cotton of your cloths was proably grown with pestididses, and the list is endless. So if you really think humans aren't speical because art, launage, and civilzation are in no way sings of a deeper existane then eating dung the only ethical thing to do is kill yourself. Or at least go live in a cave/cabin off the grid, eating what you gather. I'd discourage you from doing either, but my view fits my actions. Because I think that even someone saying something silly is still a human, and that takes precidence over animals.

While I find this comment to be quite adorable, Dwayne, it's indicative of this discussion's sad trajectory. Lets save us both some time: Since you're already reading The Collected Works of Friedrich Nietzsche, I suggest you go back and instead read The Complete Works of Friedrich Nietzsche. He'll bestow more knowledge on you than I can on an internet forum. When you're done with him, check out Being and Time by Heidegger.

On a final note, you failed to address the second part of my comment: Also remember, most people know that high fructose corn syrup has no nutritional value, whereas the average American doesn't know (or chooses not to know) about the abuses of slaughterhouses and factory farming.

The response to your original post: The biggest single health issue in America is probably obesity due to eating high levels of sugar/high fructose corn syrup. So the obvious thing to attack? Meat. I'm sure the diet they suggest is better then the junk most of us eat, but really it's so pathetic to see that these folks are more worried about how animals live the human children.

I'd like to be vegan, but I can't quite go that far (admiring those who do, though). But I try to buy only meat and animal products that have statements of fair treatment of animals on the package. Which means I eat little meat, and not every day. It's not good health-wise to eat it every day anyway. Maybe the book is too "all or nothing" about it. Children do need all sorts of nutrients to grow up, but they don't need bad quality meat and tortured meat for every meal do they? It's not "either we starve our children or we torture animals" - this is classic false dichotomy.

While I agree that people need to know more about the horrors of the meat industry, I also believe people need to know about the horrors of the sex trade, but we shouldn't give our children illustrated books about it. This type of writing verges on propaganda rather than education. There's a time and a place to learn about the problems in slaughterhouses, but that place is not at storytime.

You know, I don't care what the book says. It's a moot point, because it is a CHILDREN'S BOOK. When I buy books for my kids, I flip through them and see what they say, being a literate adult this doesn't take long. No one is forcing these parents to buy this book for their kids. It enrages me how so many parents what everyone in the world to cater to their precious little snowflake. Cater to your own snowflake!