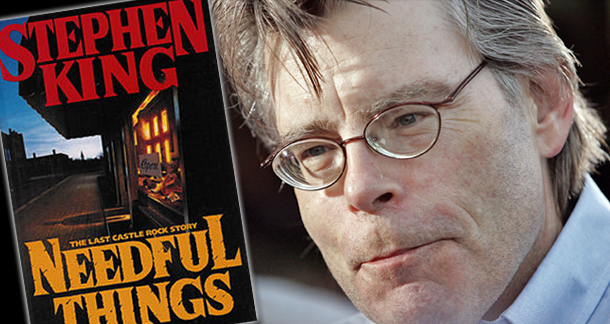 First lines are tricky - and they can also be very personal. An opening line that hooks one person may not work on the next. Often the best ones look really simple. But they aren’t. Just ask Stephen King. In an article for The Atlantic, he picked out two pieces of his writing he was particularly proud of—and realised they were both opening lines. This is his favorite:

The best first line I ever wrote is the opening of 'Needful Things.' Printed by itself on a page in 20-point type:

"You've been here before."

All there by itself on one page, inviting the reader to keep reading. It suggests a familiar story.

Paying tribute to the writing of authors Douglas Fairbairn (Shoot) and James M. Cain (The Postman Always Rings Twice), King also admitted to lying in bed and writing and re-writing those opening words until he was happy he could do the book—to the extent he can remember the exact opening phrases from his books decades after he first penned them. King’s also giving out writing advice, as he does, and I have to agree with what he says, particularly when you’re trying to get someone to read what you’ve written.

But there's one thing I'm sure about. An opening line should invite the reader to begin the story. It should say: Listen. Come in here. You want to know about this.

Absolutely. What’s your favorite first line? Mine’s from Neuromancer by William Gibson ‘“The sky above the port was the color of television, tuned to a dead channel.”

"It begins, as most things begin, with a song."

Bradley Sands from Boston is reading Greil Marcus's The History of Rock 'N' Roll in Ten Songs August 5, 2013 - 7:57am

“The only advice I can offer, should you wake up vertiginously in a strange flat, with a thoroughly installed hangover, without any of your clothing, without any recollection of how you got there, with the police sledgehammering down the door to the accompaniment of excited dogs, while you are surrounded by bales of lavishly-produced magazines featuring children in adult acts, the only advice I can offer is to try to be good-humoured and polite.”

–From Tibor Fischer’s The Thought Gang

I'm sure there are better, but I'll always keep coming back to Stephen King's much better first line in a book...

The man in black fled across the desert, and the gunslinger followed. - The Gunslinger, Stephen King.

"I panicked and swallowed a handful of fireflies and black widows the inferno had not." — Craig Clevenger, Dermaphoria

"Tyler gets me a job as a waiter, after that Tyler's pushing a gun in my mouth and saying, the first step to eternal life is you have to die." -Fight Club, Palahniuk

"As Gregor Samsa awoke one morning from uneasy dreams he found himself transformed in his bed into a gigantic insect." -Metamorphosis, Kafka

Dino Parenti from Los Angeles is reading Everything He Gets His Hands On August 5, 2013 - 11:27am

Gordon Rekcikssa from The Free City of Greyhawk is reading City of Night by John Rechy August 5, 2013 - 11:56am

"Once you have given up the ghost, everything follows with dead certainty, even in the midst of chaos." - Henry Miller, Tropic of Capricorn

"It began as a mistake." - Charles Bukowski, Post Office

"Many years later, as he faced the firing squad, Colonel Aureliano Buendia was to remember that distant afternoon when his father took him to discover ice."

Everyone knows this line, but I can't help that it's my favorite:

"It was a pleasure to burn."

"This is not for you." - Mark Z. Danielewski, House of Leaves