Best of Both Worlds: Combination Bar and Bookstore Opens in Indianapolis 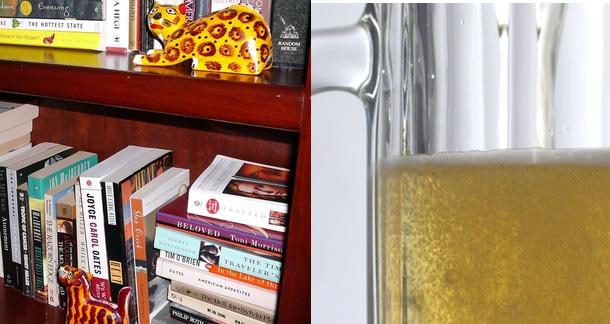 The idea of curling up with a good book and a good brew (alcoholic or otherwise) goes back about as far as Gutenberg himself, but most of the time if you want to enjoy a beer while you catch up on your Pynchon, you either have to try to maintain your concentration in a noisy, dimly lit bar, or you have to have a very long and awkward conversation with the manager at Barnes and Noble about the six-pack you're cradling in your lap. Neither situation is optimal.

There are some quieter bars that cater to a literary crowd, we've even reported on them, but a new bar in Indianapolis is taking things a few steps further than the ones that turn on a couple reading lamps and call themselves a literary haunt.

As reported in the Indianapolis Star, following a Kickstarter campaign and taking a few hints from a similar bookstore/bar, Spotty Dog Books & Ale, Books & Brews decided to set up shop on the north side of Indianapolis, far from any literary hotspots.

Maybe Books & Brews could be the start of a trend of breweries that also function as bookstores. As long as bookworms and barflies can keep it civil, there may be a future in this interesting business model.