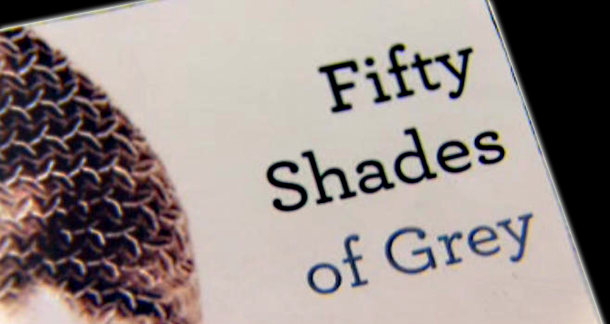 It seems everyone is reading or has read the runaway bestseller Fifty Shades of Grey by E.L. James, particularly women of a certain age. But a new audience may be out there after a teacher in Philadelphia bought the book for a ninth grade pupil.

When Maya Ladson found the book in her son’s backpack she was “decidedly displeased”, but she was even more unhappy to find that it had been purchased for him by his teacher.

"The minute I found out about it, it raised concern,” Ladson told Philadelphia NBC affiliate NBC 10 on Thursday. “This is not OK to me. This is major.”

Philip Aidoo, a teacher at Eastern University Academy Charter School who has since been suspended, bought the book for the 14-year-old. Apparently Aidoo “told school officials he did not understand what the book was about when he bought it”. Really? I have to agree with Jeanne Sager, of The Stir blog, though:

He chose it. Which means he was probably going to read it anyway. The teacher just sped up the inevitable, and he actually got a kid to READ. Isn't that what we want English teachers to do? Encourage our kids to read?"

Okay, maybe it’s a little weird for a male teacher to buy a male student a book about bondage, but hey, teenagers are curious. Would you buy it for a 14-year-old?

Not only was he being a super nice dude, he seems to have had escaped actually knowing about the terrible book beforehand. Commendable in its own right.

Cait Spivey from Portland, OR is reading I Don't, a Contrarian History of Marriage by Susan Squire May 7, 2013 - 8:51am

I'm with Rick. This was a bad choice all around on the teacher's part. Even if we believe that he didn't know what it was about before he bought it for the student--wouldn't you LOOK IT UP before buying it for a fourteen-year-old? Just to, you know, make sure it wasn't something inappropriate?

And I want to know: what were the circumstances of the gift? Did the student ask the teacher to buy it for him, or did the teacher just think "Oh hey, I'll just randomly buy this book I know nothing about for my student."

...whereas 50 SoG really doesn't have those redeeming qualities. So I guess I'm more bothered by the lack of quality inherent in the teacher's book of choice, rather than the fact that there's any sexual content. We can't assume the teacher's a perv based on his decision to give this book to a student, but we can assume he's got horrible taste in literature.

This is highly suspicious to me.

And this is why our court systems are fighting over abortion issues and our country suffers from teen pregnancy issues...because people think its actually ok to let a KID in his prime hormonal stages read this book!!! Good gosh people. HAVE MORALS!!! Yes, I have read this book...but even as a grown woman I would blush at times. It is far too detailed to give a kid. Might as well give them a how to handbook. Shouldn't we be spending more time trying to get kids to NOT have sex instead of fighting over ways to protect their rights after they screw up?!?! And no, I'm not saying that those rights should not be protected, I'm just stating the obvious other solution tha most seem to ignore. Giving them a way out isn't solving our problems. Think people! Saying its ok, at least they are reading is like saying its ok to drink alcohol, at least they are hydrated. Dumb. Just dumb.

I believe any way you look at it, it's a nasty affaire. I mean, just as Jeanne observed, the kid was going to read the book one way or the other. Going into puberty it's normal for a person to seek out his fair share of smut, be it hardcore or softcore but, it's soulely a personal endevor. The minute that there is an adult in the loop, well, that's just plane out nasty.

Don't get me wrong, I actually think that bondage is a pretty nifty subject and that it's wonderfull that a kid wants to read, but this scenario just paints fifty shades of wrong. Besides, if the guy is an english teacher you would suppose that he has at least a minimal notion on what's out there, so that excuse as to that he didn't understand it doesn't fly at all.

I'm more upset that, by giving this book, the teacher was also implicitly approving of its content. No, I don't care at all about the sex and bondage; I'm talking about the quality of writing. Couldn't he find a book containing graphic descriptions of sex that was written by someone competent?

Yeah, getting a kid Fifty Shades of Grey doesn't count as doing him any literary favors. There are plenty of raunchy books the average teenager would love that would actually count as productive reading.

I don't think the issue is buying a gift for a student, especially if a student can't afford a book to read for class. However, as a teacher, it should be common practice to research what you are purchasing. There is no way I would buy one of my students a book like this. This sounds really odd to me though. I get a bad vibe from the story, and have a hard time accepting his excuse of not knowing the content. When the book first became popular, all of the female teachers talked about it in the teachers' lounge. It was impossible to escape, even in the school setting. The book has also been all over the web and telelvision. He'd have to be living under a rock to not know what it is. One of my fellow English teachers approves the books the students read in her class. She makes them give her a list, she looks them up on Amazon, then returns the list of approved books to her students. That's just their silent reading material too.

On a slightly different note, I read Lady Chatterly's Lover when I was in high school. It was on our recommended reading list for 12th grade British Literature (I was 16 when I took the class). So, sex isn't entirely off limits in a school setting. Seems people put a lot more faith in classics.

That book series needs to be banned so this won't happen again.

when I was in grade school my regular substitute teacher, who knew I liked science fiction, gave me a whole shopping bag full of paperbacks. One of them was called Space something but it was basically slavery in space leading to abolition of same. With highly sexual overtones. Probably not something a fourth grader should be reading. But since there were no naked women on the covers my parents probably just thought it was all Star Trek stuff they just didn't understand.

I kept the book but didn't read more than a few chapters before locking onto some classic Larry Niven. But I kept it till college when I dragged it out again, read it through, and thought it was a pretty good book. But no way was it for a 10 year old.

The thing about kids and books that might not be appropriate? if they don't like it they'll put it down and find another book. If you throw a conniption about it, they're going to go over it with a fine tooth comb until they figure out what exactly it is that freaked you out.

The thing about kids and books that might not be appropriate? if they don't like it they'll put it down and find another book. If you throw a conniption about it, they're going to go over it with a fine tooth comb until they figure out what exactly it is that freaked you out.

Courtney from the Midwest is reading Monkey: A Journey to the West and a thousand college textbooks May 19, 2013 - 2:37pm

@ScottandTiffany Why shouldn't teenagers have sex? Seriously. Don't answer with "have morals," either, because morals have nothing to do with it.

Pretending that teenagers don't have sex is a lot more dangerous than giving them some shitty erotica. Going as far as saying we should be trying to stop teens from having sex is just ridiculous. Sex isn't some nasty, shameful thing that should only be saved for someone you love. Sex is healthy, natural, and a lifelong component to being a human.

The obvious solution isn't to convince kids to not have sex. That makes no sense and won't work. The statistics on abstinence-only education prove that. The obvious answer is to give them the resources and education they need to make informed decisions, not call them nasty for doing it.

The teacher was stupid, and creepy, and should be fired.

That said, this controversy highlights this country's unreasonable prudishness. I was reading very graphic stuff, from the library, when I was very young. Younger than 14. After all, John Varley could be found alongside Tolkien in the fantasy section of the local library.

My understanding is that teen pregnancies have declined in recent years. Despite free condoms. Despite contraception and Planned Parenthood. Despite the internet.  Perhaps, even, because of the internet. I can't think of a better resource to lift the veil on needlessly controversial social issues.

A lot of people credit Will & Grace with the recent wave of gay rights issues hitting the mainstream and seeing so much support.

I think it has much more to do with what can be learned on the internet. Watched on the internet. Talk about removing needless stigma, when you see what gets your groove on gets lots of peoples' groove on. And that what you might have grown up thinking "depravity" that couples of the same gender enjoy isn't all that different from the "depravity" straight couples enjoy.

Thank god for the internet. I mean that.

And if the kid wants to read 50 Shades of whatever, tell him to read Lolita instead, or some Henry Miller. Better yet, tell the kid to ask his parents and be done with it.

The kid can then make his own decision as to whether he wants to sneak it out of the library or the local five and dime.