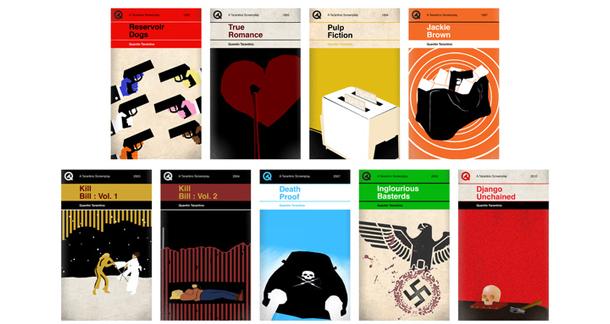 Here's something really neat: artist Sharm Murugiah has re-imagined Quentin Tarantino's films as vintage book covers, including the writer/director's screenplay True Romance, which was directed by the late Tony Scott.

Each image graphically reconstructs a scene from the film it embodies, the effect of which is both visually pleasing and builds up narrative intrigue. So for instance, the Kill Bill Vol. 2 cover looks amazing, and if you don't know the story, you'll ask yourself, "So what's up with the buried-alive girl?" This of course will prompt you to pick up the book and read it— exactly what a good cover should do.

Unfortunately, Murugiah's works do not currently adorn published screenplay editions of the films, but if you're reading this Mr. Tarantino, you could do worse than make a deal with this artist. A whole lot worse.

Lucky for the rest of us, each print can be purchased from Society6, an online artist's retail shop, for $12.48 a piece, about the price of a paperback novel. Framed art prints and stretched canvas are also available. Check it out!

Who wants to pick one of these up? Any favorites among the bunch? I particularly like both Kill Bills and Jackie Brown.

Brian Ingham from Stillwater Oklahoma is reading There is No Year by. Blake Butler March 26, 2013 - 8:27am

I would buy every one of those. The Reservoir Dogs cover is amazing.

Minimalist and brilliant. I agree: the RD cover is my fave, too.

Joshua Chaplinsky from New York is reading a lot more during the quarantine March 26, 2013 - 9:41am

Fantastic, all of them.

These are very good. I'm assuming these are done by the same person who did the Harry Potter covers a while ago. Some how, of all the images from Pulp Fiction, the pop-tarts does seem to be the perfect scene to portray the movie.