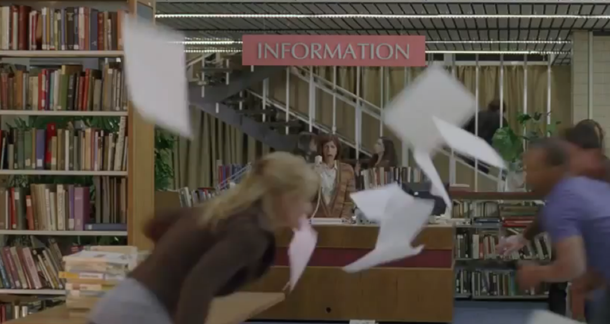 The Super Bowl was on Sunday night (Were you watching? Or avoiding?) and, as always, the ads were hyped almost as much as the game.
There have been some famous ads shown during the annual festivities, including the Apple Big Brother spot in 1984, those frogs saying “Bud-weis-er”, and Mean Joe Green taking that kid’s Coke. And with the cost of an ad in 2013 reaching $3.8million for 30 seconds the competition is hot to make an impact, quickly.

So, this year Oreo decided to join the fray and came up with this little gem of library patrons demolishing a library:

It’s not the first time those of us who read have been the target of parody as GalleyCat pointed out, as Bud Light poked fun at reading in general in 2010.

Oreo’s got it right, in my book, though — the cop whispering through a megaphone killed me! I haven’t read whether any books were hurt in the making of this commercial, however…

Ray Richards from Michigan and Iowa is reading The Great Shark Hunt by Hunter S. Thompson February 16, 2013 - 1:07am

Why the hell would they take down a comercail video? It is an advertisment.