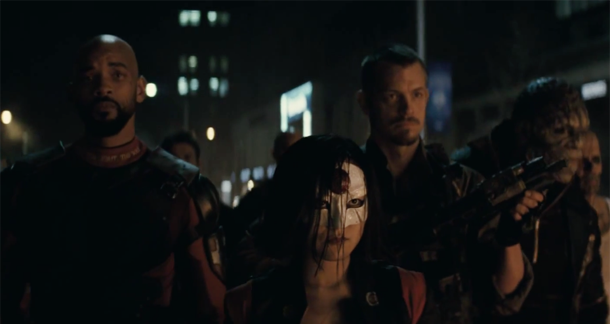 We all saw the shaky smartphone cam footage leaked from San Diego Comic Con, giving fans their first extended look at the upcoming Suicide Squad film. Now, we can see the trailer in all its HD glory over at Warner Bros.'s YouTube page—and just about everywhere else on the web, including right here at LitReactor:

The film features both well and lesser-known DC villains banding together to "save the world," as Deadshot (William Smith) says in the above footage. Basically, it's The Wild Bunch with freaks and psychos. Of course, this is an adaptation of the comic series of the same name, originally created by Adam Glass and Federico Dallocchio.

Suicide Squad is under the direction of David Ayers, and also stars Jared Leto as the Joker and Margot Robbie as Harley Quinn. It is slated for release on August 5th, 2016.

Personally speaking, while I think Batman Vs. Superman still looks like a total snooze fest, this film seems to have some personality. What are your thoughts?

Subjective Preference vs. Objective Quality: A.O. Scott's 'Better Living Through Criticism' and Why Everyone is a Critic