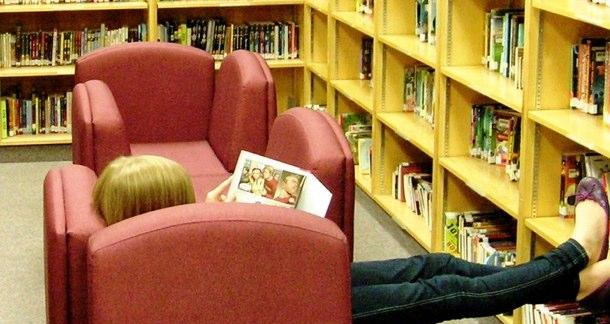 Children may love eBooks and think they're "fun and cool," but the notoriously hard-to-please 13-17 demographic still thinks they're, like, totally square. Despite the fact that adults are mostly convinced that readers and tablets are the way of the future, teens are still clinging to the past, with, according to a recent study presented at a conference on children's books, 66% admitting that they prefer things printed on actual pages. Kids today! Always doing the exact opposite of what you, as an adult, think they should be doing.

The statistics, which come from two consumer studies, illustrate the fact that, despite the publishing industry's worries, printed books are still relevant--even to teenagers, who are usually some of the earliest adopters of new technologies. But apparently, it's the lack of some very specific technological advancements that is keeping teens back. From the article:

One reason for this resistance: Teens like using social technology to discuss and share things with their friends, and e-books at this point are not a social technology. An increasing number of teens surveyed says there are too many restrictions on using e-books: 14 percent said so in 2011, compared to 6 percent in 2010.

Surely, that can't be the only reason, because paper books also can't Tweet. But there's another--and it's something that, like large-framed glasses and a reverence for napping in the afternoon, teens share with geriatrics:

Teens (like other age groups) say the major barrier against reading on mobile devices is the size of the screen.

But does size really matter that much? My copy of The Perks Of Being A Wallflower was so small I could fit it in my second-hand jacket when I was an angsty high schooler. Are today's teens already a little too old to be enamored by technologies that seem less cool like, say, a tablet computer? Or maybe it's because they're being raised in a bizarrely nostalgic era, where cool kids can have their own green beans and typewriters are awesome again.

Image: Adding a little shoe spice to the stacks ... by Enokson, on Flickr

Methinks this article could have been more accurately titled "Study: Teens Think Your eBooks Are Lame, Too Long"

Your implication that many teens are in the library reading books is a bit off-base. They aren't. It's not that they don't like e-books but that they just don't sit down and read anything longer than a page. We've been trained to read articles, tweets and posts that rarely ever go beyond 2 paragraphs, moving quickly on to the next. We don't want to be stuck reading a novel for 2 weeks, we want constant stimulation

@tjtigers14 - part of that is also that we are communicating increasingly via symbols, logos, and other visual means of communication, as opposed to pure text. Part of this is due to the nature of internet communications, part owing to a growing global culture that finds images easier to mediate than text in any given language. It isn't simply that our attention spans are shortening (although I don't deny this), it's also that our  visual communication is becoming more sophisticated. Think emoticons and graphic novels.

Joshua Chaplinsky from New York is reading a lot more during the quarantine January 24, 2012 - 1:14pm

Your implication that many teens are in the library reading books is a bit off-base. They aren't. It's not that they don't like e-books but that they just don't sit down and read anything longer than a page.

According to the study, no.

Dwayne from Cincinnati, Ohio (suburbs) is reading books that rotate to often to keep this updated January 24, 2012 - 1:27pm

What do 13 - 17 year olds not hate, except things folks in other ages despise?

I am a young eco-friendly minded person, and I get that e-books are good because they save paper and therefore trees, and yet I still can't bring myself to buy an e-reader or read books that way. I buy real books in the store on a regular basis, and my kids all read real books too. I hope real books never stop being produced completely in favour of the e-version. I am prone to liking nostalgic things, like old typewriters and vintage memorabilia, but I buy new books.

On a complete tangent, imagine all those post apocalyptic movies where all the electronics and data have been wiped out. Do we really want all that hard work and priceless literature gone forever, or do we want it in hard copy so the archeologist aliens can understand us when them come to our charred remain of a planet. Think about it.

Also I do see older people reading on kobo and think they look ridiculous. These are people who can't operate a computer or set a VCR... yes they still have VCR's.

...and this 'group" might be a certain subset of 13-17 year olds who happen to read, and are more likely to take part in a survey, versus the masses who are doing those other mysterious things teenagers do every rotation of the earth...

And those who happen to read will almost always have an ingrained bias FOR books versus e-books.

Do we really want all that hard work and priceless literature gone forever, or do we want it in hard copy so the archeologist aliens can understand us when them come to our charred remain of a planet.

That's why it's stone tablets for me. All you paper-readers are suckers.

There's just something about holding a book and turning its pages that can't be replicated by an e-reader, and teenagers understand that just as the rest of us. We always expect teens to jump on whatever bandwagon is in front of them, when most of the time it's the adult population that has the conformity problem. It will change in the future, but I'm glad that young people are still experiencing the tangible connection with books that so many of us are afraid is waning in our culture.

This has been my argument for paper books ever since the first eBook came out:

Pride of ownership.  How many of you out there have (at least your favorite) books displayed on a shelf?  To further illustrate my point, how many of you have a picture of this shelf stashed in a computer or camera somewhere?  We love glancing over and admiring our collection.  The same reason why baseball cards will never be bought in the App Store and stored in an album on our phone, and why that digital Monopoly game will never come close to the popularity of the conventional version.

Book displaying is also a trait that a lot of us learned from our parents, friends and friends' parents do it.
(Not much of a point there... but it seems to help...?)

Not to mention...
-The latest paper Palahniuk goes for $15, while the Kindle ranges $79-199 (I know, you only buy it once, but it's still quite the initial price tag, and people hate spending large sums all at once.)
-The latest paper Palahniuk doesn't have the possibility of ads popping up.
-Discovering great books is so much easier by browsing a book store. Amazon does help with the reccomendations, but what about something totally different than what you already own?
-You know those 13-17 year olds would never pass up the opportunity to look cool to someone by lending them a book that they think is the cat's ass.

What I think is a perfect application for tablets in respect to eBooks: textbooks.  Holy hell, imagine the money the average college student saves by dowloading instead of buying.

Sorry if this was long winded, but very rarely do I know enough about something to be able to toss in my two pennies and expect it to hold water with youz guyz.

So....these 13-to-17-year-olds haven't yet had to finish a book, or several? It is difficult to carry a larger book with you everywhere as you try to squeeze in reading-time. It is difficult to hold a larger book up as you read in bed. And, I am reluctant to highlight and scribble in the margins of paper books - with ebooks you can highlight, scribble notes, and even share passages via Twitter or Facebook. The biggest benefit though is carrying 300 items but yet their in the one same slim volume with the same light weight.

So...guess I'm not impressed with the survey judgments of the latest generation of 13-to-17-year-olds, or rather, I don't understand them....

Well, teenagers carry backpacks, many of them outside of school as well as during school. It's much easier to haul "real" books around that way.

And I am a little...put off...by the implication that teenagers don't read so their opinion isn't valid--that is a pretty sweeping statement. Aside from teens who read, in their own time, for fun, every high school student in America takes English courses, and so, at the very least, many of them read the novels assigned. The "young adult" genre didn't exist in name when I was in high school, but now there is a whole section of Barnes & Noble dedicated to it. Methinks that means at least SOME teenagers are reading.

Dwayne from Cincinnati, Ohio (suburbs) is reading books that rotate to often to keep this updated May 18, 2012 - 12:13pm

I switched to Kindle and it took me about 35 seconds to never care if I saw a paper book again. Go eInk.