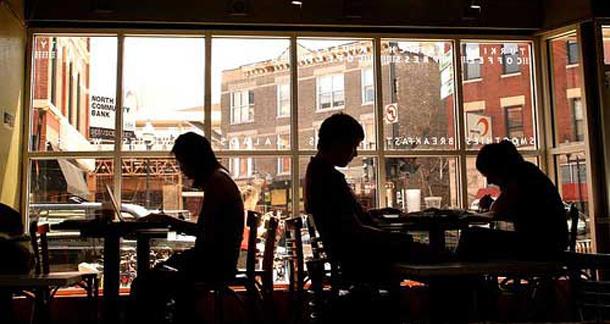 A new study published in the Journal of Consumer Research suggests that writing in a public place--like a coffee shop--is good for getting your creative juices flowing. Because it's loud.

More than 300 people were included in the study, which showed that those who had ambient noise in the background (70 decibels, on par with a Starbucks) scored higher in objective word-association tests. In addition, their answers were deemed more creative by other participants.

Personally, I'm not a fan of writing in public places--it's too much of a personal process, and I don't want people staring at me while I do it (though editing is a different story). And I've always thought people who wrote in coffee shops were more concerned with being perceived as a writer, than with getting any real writing done.

But, hey, apparently it works.

What do you folks think? Do you like writing in public? Or does the very thought terrify you?

I listen to podcasts and music all day long. Music in particular is helpful to get me in the zone when coding, so it makes sense to me.

I love listening to music as write, but can't hack public places. I end up listening in to conversations instead of writing.

Zackery Olson from Rockford, IL is reading pretty much anything I can get my hands on March 6, 2012 - 1:42pm

I can write on a train ride, but I've never tried to write at a coffee shop or any other public place.

So all those people that have been a living joke to writers by sitting in starbucks with their Apple computers pretending to write were actually writing? I am honestly shocked.

I've a couple of 'Music to write to' playlists set up for when I really want to get into it, so I can accept the study from my perspective.

I love that there's a study that finally confirms my assumptions! There are two types of environments I can write or study in- either one like a coffee shop with a lot of noise, people, and suffling around, or absolute, complete and utter silence... the former is obviously easier to find, so I usually end up there. I should specify though, I can't stand just listening to music; I can't focus at all. But if it's coupled with people and espresso machines, then right on.

Finding my own little corner in a coffee shop and being able to sit down there and just focus on my writing or whatever else I'm doing with everything going on around me is the best.

The only experience with writing amidst noise and chaos was working on a novel backstage during a high school play; all other writing I do is when I hole myself up in my room. But I'd definitely love to sit down and relax at a Starbucks with my laptop and type the day away.

I only write in public, whether it's a McDonalds, coffee shop, library, etc. Nothing to do with vanity, trust me, people could care less what you are scribbling down in your notebook - I just don't like being cooped up in my house anymore than I need to be - though noise-canceling headphones are a must! And I do agree that it helps the creative process - you got to take the good with the bad when writing in public spots!

I think Jessica is spot on. Works the same way for me. Another thing about sitting in cafes is that you can observe people and what they're doing and use it to get the ball rolling.

Sure, there are a lot of fakers out there that like to be percieved as creative types, I see them all the time when I feel the urge to lounge around and write in a coffee shop.  But there's also a lot of legit writers that go there because those places have comfy chairs, relaxing atmosphere, plenty of people-watching opportunities, muffins-a-plenty... and good coffee on tap.  Literally.

Though, in my opinion, the music usually sucks.

Ray Richards from Michigan and Iowa is reading The Great Shark Hunt by Hunter S. Thompson March 8, 2012 - 1:18am

I like it but it doesn't feel like real work. I have a notebook but it is so much slush and personal garbage that it is kind of tough for me to wade through. It is far away from my haughty Internet and the distractions of games, social demands, and media.
There is also a level peer pressure to focus, like in a school study hall. If you feel watched you can trick yourself into sticking to task better. It is cheaper to just learn self control.

Dwayne from Cincinnati, Ohio (suburbs) is reading books that rotate to often to keep this updated March 9, 2012 - 12:16am

I prefer some place with people around, but not anyone who can really seem or I have to interact with. 2nd floor at a library when folks are down stairs something like that.

Many large websites are written in Python https://uk.liuxuesavior.com/python-and-java-dai-xie/, such as China’s YouTube, Instagram, and Douban. Many big companies, such as Google, and even NASA (USA Aeronautics and Space Administration) also use this language a lot. Uncle Gui's positioning on Python is "elegant", "clear" and "simple", so its programs always seem to be easy to understand. Novices learn Python, not only easy to get started, but also very complicated programs can be written later. In general, the philosophy of Python is simple and elegant. Try to write easy-to-understand code and write as little code as possible. If an experienced programmer shows off to you with thousands of lines of obscure code, you can laugh as much as you want.