Student Chastised by Teacher for Not Reading "Black" Enough 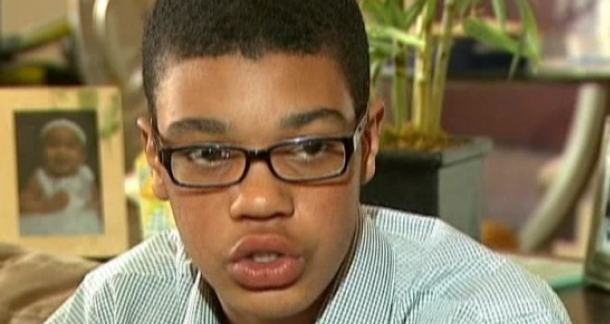 Via TheRoot, The Westside Gazette:

A high school freshman in Virginia has alleged that his teacher singled him out when she critiqued his in-class reading of Langston Hughes’ Ballad of the Landlord for not being “black” enough.

Jordan Shumate, of George C. Marshall High School, was reading the poem out loud as directed when his teacher, Marilyn Bart, stopped him and asked that he  perform the piece in a “blacker” voice, and then demonstrated exactly what she was asking for:

She told me, “Blacker, Jordan—c’mon, blacker. I thought you were black”…she read the poem like a slave, basically.

According to Shumate, when he asked if she thought that all black people spoke in such a manner, he was told to take a seat and reprimanded for speaking out of turn. Bart has reportedly singled Shumate out in the past, asking him to rap out a poem by Tupac Shakur, and, during a lesson on stereotypes, asking him why blacks like grape soda and rap music.

Shumate relayed the incident to his mother, who notified the school, and an investigation was launched. Nicole Page says her son is owed an apology from Bart, and that she remains optimistic about the outcome of said investigation:

As long as the process is thoughtful, and they look at all the facts, acknowledge that my son told the truth, in the future implement some racial [sensitivity] training, I will feel comfortable.

Wow...I try so hard to defend teachers. Then you see stuff like this, and it makes it harder on all of them. I just can't even imagine what that teacher was thinking.

The teacher should be ashamed of herself! Think of what she is instilling in those young minds watching all this play out. SMDH :/

Some of the dimmest bulbs I've encountered are Education Majors. I feel that sometimes a person who goes through the public education system with the rest of us, then attends college/university to train as a teacher, who then spends their working life inside the education system - that individual sometimes exists in an intellectual vaccum, entertaining ideas that are extremely divorced from reality...

Hey! Teacher! Say it smarter - you know, SMART. I thought you were smart....

I have a joke, but I don't want to be flagged.

Also, kudos to John J. for letting the facts speak for themselves.

My Sociology teacher in highschool once asked me if the scars on my hands were from all of the knife fights I must have gotten into since I was a hispanic looking male living in a lower socio-economic area. Highschool never ends...

edsikov from New York by way of Natrona Hts PA is reading absolutely nothing March 24, 2012 - 1:44pm

Streuth! That's a bit rich by crikey. Sounds like this Shielah is two dingos short of a digeredoo...

Personally I wonder whether or not the teacher fits the standard American sterotype of overweight, inbred and illiterate (sorry guys, but that is still how the world in general thinks of you.)

the standard American sterotype of overweight, inbred and illiterate (sorry guys, but that is still how the world in general thinks of you.)

Awesome, that means I can go on hating foreigners!  :-)

Awesome, that means I can go on hating foreigners!  :-)

Also, race and nationality are not the same.  Prejudice is not going away anytime soon.  Not to be too picky.

First to the article--ho-lleeee shit!

Second, to the Aussie--you know, I've heard people say that a lot, but I've never encountered it while in Europe. I find that there are bigots out there who rely on stereotypes everywhere and in every profession, but generalizations tend to mislead us.

Second, to the Aussie--you know, I've heard people say that a lot, but I've never encountered it while in Europe. I find that there are bigots out there who rely on stereotypes everywhere and in every profession, but generalizations tend to mislead us.

You are very right there. Generalizations are usually the culprits when it comes to bigotry. I find myself guilty of it on occasion, although it is usually based more on social groups rather than nationality, race...etc. In this case I was using a sweeping generalization that was more common a decade ago in order to make the point about overused sterotyping.

So if I've offended anyone I apologize, it was ment only in jest.

Besides, I've got a few friends in the US (from some very diverse ethnic backgrounds, none of whom fall into the old sterotype), including an editor or two, whom I'd fight to the death for.

There are so many bad teachers now. I already know it by myself. But I can say for sure that a lot still depends on the specialization. If you study well, you will be treated better. I have already noticed this. To study well you have to choose the right specialization that suits you exactly. That is why I personally recommend you to think about studying this excellent and really true top 10 hardest college majors about the most difficult specialties to enter before you start directly. I hope that this will be at least a little useful for you. Good luck and success, I hope it helped!

Despite the fact that I recently discovered the services for writing an essay, I have already managed to use the services of https://expertpaperwriter.com/essaypro-com-review/ of these guys, and twice. I can only say what I appreciate when they do everything on time and do well. The guys have fulfilled my main requirements.