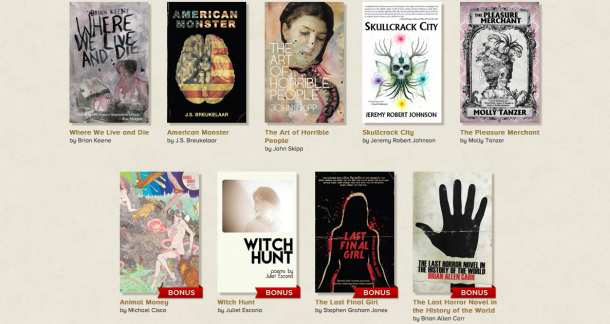 StoryBundle has a new deal, and it’s right up the alley of many in the LitReactorVerse! The site’s Weird Horror bundle features nine titles, all of which come from Lazy Fascist Press, many of which were written by LitReactor columnists and instructors!

For those unfamiliar with StoryBundle, I’ll let the site’s FAQ do the explaining for me:

StoryBundle is a way for people who love to read to discover quality indie books written by indie authors. You know how it's always hard to find something good to read? StoryBundle hopes to solve that. We take a handful of books—anywhere from six to nine—and group them together to offer as a bundle. Then you, the reader, can take a look at the titles we've chosen and decide how much you'd like to pay. Think of us like a friend that scours independent books for undiscovered gems, then bundles these titles together for one low price that you decide. Yeah, we mean it; you get to set the price that you want to pay!

Books in the Weird Horror Bundle include Where We Live and Die by Brian Keene, American Monster by J.S. Breukelaar, The Art of Horrible People by John Skipp, Skullcrack City by Jeremy Robert Johnson, The Pleasure Merchant by Molly Tanzer, Animal Money by Michael Cisco, Witch Hunt by Juliet Escoria, The Last Final Girl by Stephen Graham Jones, and The Last Horror Novel in the History of the World by Brian Allen Carr.

There are still 15 days left before the bundle expires, but it’s better to be safe than sorry, so if you’re interested you should take a look now!