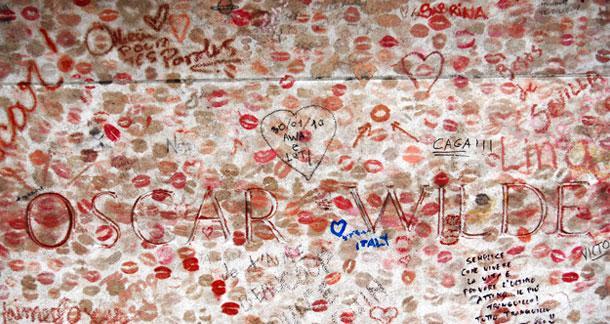 And here you thought the worst thing you could get from kissing was mono.  Well, Oscar Wilde's descendants would be happy to argue that one. Not only did they wipe off all the lipstick kisses left by admirers on his tomb in the Père Lachaise Cemetery (it's kind of a tradition), but they walled it off in a protective glass barrier so you, the visitor, couldn't do it again.  So are they just totally jealous that Oscar is getting all the love and they're getting stuck with the cleaning bill?

Eh, maybe.  According to them the kisses fall under the deterioration/defamation category.  Merlin Holland, who is Wilde’s grandson, said, “We are not saying, ‘Go away,’ but rather, ‘Try to behave sensibly,’ ”  In laymen's terms, Oscar Wilde's tomb is not a spot in Jet Set Radio meant for face-tagging.  Let's keep it classy, people.  "I'm sure there will be criticism," Holland added.

Hells yeah there was.  Bloggers were quick to gripe about what a travesty this is, one of them saying:

“I guess some may see the lipstick as being a vandalism of the work of Epstein, or a sign of disrespect to Oscar, as it has ultimately degraded his memorial.  But I have to disagree.  I'm a fan of Epstein's work generally, and therefore keen that any of his sculptures is treated appropriately and cared for.  But in this instance, in my view, the continued devotion of Oscar Wilde's fans more than 100 years after his death, represented by those lipstick marks, enhanced the impact of Epstein's bold, modern memorial, making it an even more fitting monument to a great decadent and aesthete.  Cleaning them off, and putting the tomb behind a barrier seems to be missing the point."

Babes, I totally agree with you.  Wilde died young and penniless.  I'm sure he would have appreciated the sentiment of his many visitors--and seriously, whoever heard of such a thing as "disrespectful kisses"?

So what do we think, LitReactors: does this whole barrier ordeal tarnish the legacy?

Aaron Deering from where the ghetto meets the sea is reading Wuthering Heights December 21, 2011 - 2:03pm

I love you for referencing Jet Set Radio.

Joshua Chaplinsky from New York is reading a lot more during the quarantine December 21, 2011 - 2:11pm

I think the kisses are cool, but not tagging that shit with your name or BF-4-EVA! Oh, and that glass barrier is an eye sore.

Agreed... that's like clearing the Jim Morrison grave. I think it's actually an outrage. Something else should be provided in order to apease his admirers.

amongthegoblins from North Carolina is reading Among Others, The Three Musketeers, Bindoff's Tudor England, and Les Sortceliers December 21, 2011 - 3:53pm

EricMBacon from Vermont is reading The Autobiography of a Corpse December 21, 2011 - 4:49pm

I think I would adorn lipstick just to leave my mark. I just wish I knew what my color is.

Jet Set Radio. well done. It's all about those songs like Alison cleanup on aisle 39 and birthday cake. If you were there you know what im sayin'

NotMarilyn from Twin Cities, MN is reading Mistress of Rome by Kate Quinn December 22, 2011 - 5:29am

Well I guess I can cross that off my bucket list.

That comment about "We're not saying go away." Um, yes you are. A glass barrier says, "Get the hell outta here ya hooligans!"

Anyone who's read Oscar Wilde knows that he was an attention whore. I'm sure he would've seen the thousands of kiss marks as the ultimate ego stroke.

Mick Cory from Kentucky is reading everything you have ever posted online and is frankly shocked you have survived this long December 22, 2011 - 7:48am

I think as a society we need to learn to let go. This compulsion to preserve often impedes progress. I agree with the notion expressed already, that the man would have embraced the practice.