Stephen King's 'It' Coming To The Big Screen...Twice 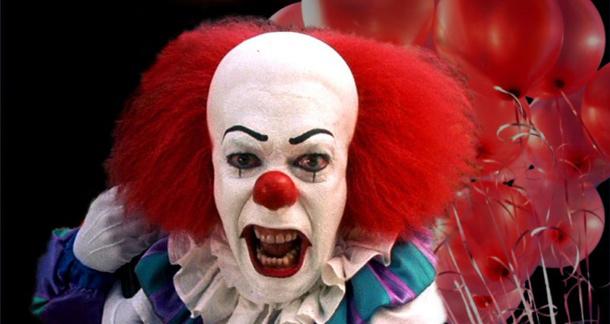 Via The Hollywood Reporter

If you're devising a wicked creature for your entry into LitReactor's June horror writing challenge, you could certainly do worse than to garner inspiration from the inter-dimensional, shape-shifting, fear-eating, monstrosity that is Stephen King's It. The ancient evil—which most often saunters around in the form of a disturbed clown called Pennywise—terrorized a group of seven kids in King's 1986 novel and again in ABC's three-hour 1990 miniseries version.

Now it has been announced that Warner Bros. is bringing the creepy SOB to cinemas in a two-movie series. No release date has been announced yet, but we do know that director Cary Fukunaga (Jane Eyre) will co-write the screenplay with Chase Palmer (Frank Herbert's Dune). It joins the ridiculously long list of Stephen King projects in the works at the moment including:

There hasn't been any official information on how exactly the book will be divided into two movies, though the obvious option is for one movie to focus on the characters as children and the second to focus on their adulthood. It makes sense because trying to cram all 1100 pages into a single movie would rip gaping wounds in the narrative. I'm also behind this idea because while the miniseries version of It was pretty damned solid—thanks in large part to Tim Curry's masterful portrayal of a seriously demented clown—the truth is, a network miniseries run during prime-time can't capture the true viciousness of this book like two R-rated films can. So I'm in.

What about you? Interested in seeing It on the big screen? And what I'm dying to know is: who in the world is going to be able to fill Tim Curry's giant clown shoes?

The original miniseries was epic, I still get the creeps when I watch it and jump over sewer drains for a week. I'm not sure how I feel about it coming to the big screen and I really hope the rumor of breaking it into into It Kids and It Adults is not true. The interweaving stories is why the novel was so enthralling and eliminating that element somehow feels like cheating.

For whoever gets cast as Pennywise, they've got a monumental task ahead of them. Tim Curry, as you mentioned, was brilliant.  He was seductive, terrifying, evil, and, the most brilliant part, he was a generic clown you could see at any circus. Topping his performance will be tough, but if Cary reunites with Michael Fassbender... could be magical.

I am not sure how this makes me feel. As Asshole has pointed out (haha), the mini-series was epic. Sure, they left some bits and pieces out that made the novel even better, but I am not sure how the new movie can do any better. And the cast...IS there another Pennywise out there? I'm not sure. And the kids were amazing.

This makes me curious and sad at the same time.

I feel the same way about The Stand and Carrie. The original versions were amazing and are absolutely ingrained in our popular culture. I don't feel any strong emotional attachment to Pet Semetary, so I guess I can be fully open minded about that one, and The Langoliers was pretty "eh".

I'm looking forward to the movies. I loved the book but felt the TV mini-series lacked the punch of the book. "It" was an epic book with an over-the-top climax (pun intended, read the book). After the success of "The Mist" it's clear technology has caught up to King's more complex stories.

Tim Curry was the best part of the miniseries. The rest was pure shit. You'd need a cannibal to direct, somebody like Pasolini, only not dead. So maybe Lars Von Trier. He'd never do this, but let's just say he lost at extreme checkers or something. Even then, I don't think it'd hold at the movies. It's simply not that collapsable. Even for two movies. The only right way to do this, or especially The Stand (or Palahniuk's 'Haunted' and oh man I'd kill to direct that piece) is to get it on HBO. You can fully unwind the book there, make a real adaptation. I understand the two mediums are different, but at this point in our culture, if you can describe it on a page, you can put it on a screen. It'd be shit at the movies. HBO, you could run episodes and take your time to let tension develop. It'd give you time to let the audience begin to care about the characters before they were slaughtered. I'm against this, but I'm for it at the same time. I just hope it gets a fair shake. I'll see you guys later, I'm gonna take some Flu Buddy and watch Jonathan Brandis' terrible acting.

The original miniseries holds a certain nostalgia and sentimental value for me; it was the first King adaptation I ever saw. It probably wasn't so great that I saw it when I was five years old or that it gave me nightmares for a week and a lingering discomfort concerning clowns that has only started to fade twenty-plus years later, but fuck it. I think that the way the story's chronology was approached in the miniseries was ideal. For me, that image of "IT" written on the wall in blood at the end of the first episode is as iconic as anything in the history of the horror genre. Maybe that's just me marking out for the author who really got me interested in writing when I was a kid but again, fuck it. As always, I'm interested to see how well the parts are cast. For the life of me, I can't think of anybody who would be able to pull off the Pennywise role as well as Tim Curry did. I'm also interested in who will be playing the role of Young Richie, it has always seemed that Seth Green was perfect for the role in the original miniseries.

If nothing else, the special effects should be fantastic.

As for the other remakes. Firestarter definitely needs a makeover. I don't think much of the original version of Carrie, though the miniseries remake was decent. I'm not that interested in seeing a third version of the story though. I thought that Pet Semetary was one of the better 80s adaptations of a King novel, but a sequel could be cool.

The Ten O'Clock People is one of my favorite King short stories and I'm excited to see how it will turn out on the big screen.

I'm marking out completely for the Dark Tower series in film and television adaptation.

As always, and with all adaptations mentioned here, the quality remains to be seen.