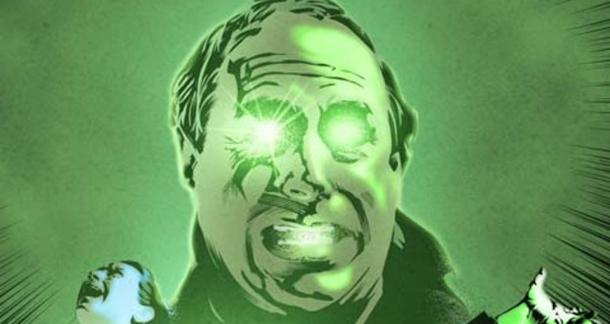 GalleyCat reports that iconic and highly prolific author Stephen King has released a comic strip adaptation of his short story "Little Green God of Agony." According to stephenking.com, the story first appeared in Stephen Jones's 2011 A Book of Horrors anthology, as well as Ellen Datlow's The Best Horror of the Year, Volume Four.

The comic, which appears exclusively on King's aforementioned web page, was drawn by Dennis Calero, who provided the ink for previous horror adaptations Kolchak: The Night Stalker and Masters of Horror: Dreams in the Witch House. He also worked on X-Men: Noir for Marvel and Legion of Super-Heroes for DC, so he's fairly bad-ass.

Admittedly, I learned all of the above information from Wikipedia, so I was not previously familiar with Calero's work. His art for "Little Green God of Agony" has me intrigued though. His use of shadow, light and color recalls the chiaroscuro cinematography of Universal's classic monster films (one character even looks a bit like Lon Chaney).

Here's a summary of the web comic, courtesy of stephenking.com:

Katherine "Kat" MacDonald is an RN hired to care for wealthy client, Andrew Newsome, who has gone from doctor to doctor trying to find a quick cure for his lingering pain to no avail. She is convinced that he would overcome the injuries he sustained in an airplane crash but he is unwilling to endure the pain of physical therapy. In desperation, Newsome has hired a healer, Reverend Rideout, who promises to "expel" his pain.